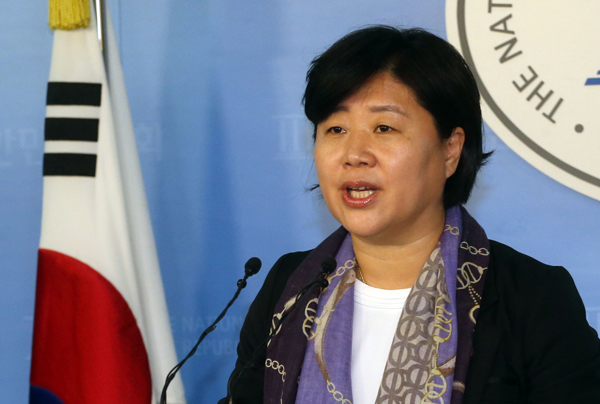 The main opposition Minjoo Party of Korea said Sunday it will launch an internal audit of Rep. Seo Young-kyo over the controversy concerning her decision to hire family members.

Seo, a two-term lawmaker, was discovered last week to have hired her daughter as an intern in her parliamentary office for five months in 2014. She also hired her older brother as the accounting manager of her supporters’ association and hired her younger brother as a secretary, a fact that was already revealed last year.

She said in hindsight that while it might not have been the best move to hire her daughter as an intern, that she had done so because the original intern had quit suddenly in order to further her education. Seo was accused of not paying her daughter wages for five months, saving some 4.8 million won ($4,094), and depositing the daughter’s wages into her own personal political fund. She denied that the wages were used personally.

Controversy heightened as Seo was accused of using her influence in order to get her daughter into law school. Additionally, Seo was said to have plagiarized a part of her own doctorate thesis.

The lawmaker received her undergraduate degree in politics and foreign affairs, her master’s degree in public policy and her doctorate degree in East Asian studies, all from Ewha Womans University.

She was also accused of inviting her husband, an attorney, to a National Assembly Legislation and Judiciary Committee dinner and introducing him to senior prosecution officials.

As the onslaught of allegations continued, Seo stepped down from her position in the Legislation and Judiciary Committee on Friday.

Seo issued a apology in an official statement that same day in which she said, “In order not to burden the party, I will step down from the legislation and judiciary standing committee. I again apologize to the people. Though you held expectations and trusted me, I have hurt you.”

She added that this was “an opportunity to look back at myself properly.”

The Minjoo Party is treading cautiously because if the controversy snowballs it could tarnish its image, especially amid reports that it had overlooked allegations surrounding Seo in order to ensure her re-election.

“If the allegations are proven to be real then it will go against the value of a party that is based on the doctrine of equal opportunity and fairness,” the Minjoo Party said in a statement Sunday. “It will also seriously damage the dignity of the party, thus the inspection was launched.”

The ruling Saenuri Party demanded that further measures be taken against Seo on Sunday, alongside the scandal surrounding minor opposition People’s Party’s Rep. Kim Su-min over whether she received kickbacks from advertisement companies during the April 13 general election.

Min Kyung-wook, a spokesperson of the Saenuri Party, said, “[Minjoo Party] Chairman Kim Chong-in has to actively step forward amid Rep. Seo’s abuse of privileges and allegations, which the party overlooked.”

“A measure that matches the expectations of the people is the very least that can be done out of respect to them,” Min continued.