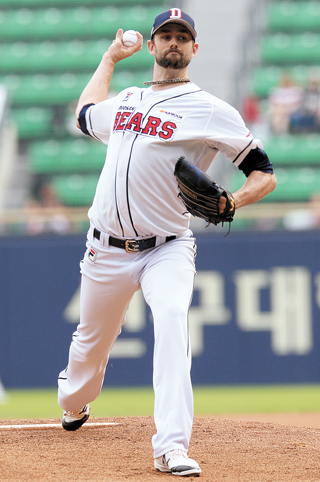 The time has finally come again for the showdown between the two teams currently leading the Korea Baseball Organization (KBO), the Doosan Bears and NC Dinos.

The Bears are prepared for the series as they have lined up three of their top-ranking pitchers for the upcoming series. Dustin Nippert, who is leading the number of wins with 10, as well as Jang Won-jun and Michael Bowden who are tied at third with nine wins, will all start for the Bears over the next three games against the Dinos. To once and for all demonstrate its superiority, the defending champs have completely revamped the pitching lineup.

Last week, the starters for the Bears were Nippert, Bowden, Huh Jun-hyeok, Jang and Yoo Hee-kwan. But with game on June 22 rained out, Nippert was able to take a day off and prepare for the game against the Dinos.

It wasn’t enough for the Bears to have Nippert fresh and well-rested. The Bears decided to take a step further to increase their readiness for the Dinos. To do so, the club also had Jang take a day off on June 25, saying he’s been somewhat overworked recently. The Bears are not wrong. Jang’s thrown more than 110 pitches in the past four games, tossing 126 pitches against the Giants on June 12 and 115 balls against the Lions on June 18. It isn’t surprising that his shoulder needs a break.

The rotation also has changed. Jang will be stepping in between Nippert and Bowden, instead of going after the two foreign pitchers. Before, the Bears manager Kim Tae-hyeong mobilized pitchers in the order of two righties and three lefties. But now, it has been reorganized to go back and forth between a right-hander and a left-hander.

It is no coincidence that the rotation has changed suddenly before the series. The three starting pitchers are the best cards that the Bears can put out. 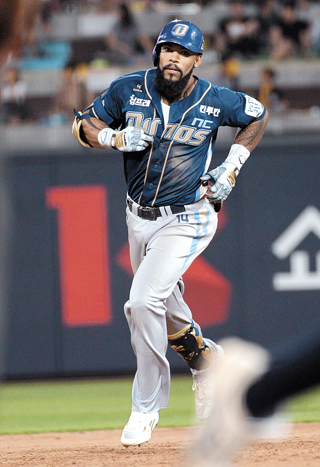 The Dinos know that the Bears are preparing for the showdown of their lives. After all, the Dinos are the only club in the KBO with a probable chance to take down the Bears from their throne. The Bears are already 12 games ahead of the third-ranked Nexen Heroes. But the Dinos has narrowed the gap with the defending champs, thanks to the team’s 15-game winning streak early this month. Right now, the Dinos are only five games behind the Bears. Depending on the result of the series, the difference can be reduced or widened.

And the Dinos are more than ready to take on the Bears’ Nippert, Bowden and Jang. The team’s middle batting lineup, consisting of Na Sung-bum, Eric Thames, Lee Ho-joon and Park Sok-min, is deemed to be the most lethal combination in the KBO today. Composed of power hitters, the lineup gives no chance for a breather to the opposing pitchers. How Nippert, Bowden and Jang will do against the quartet is still up in the air.

No one knows how the series will turn out. The two have shared three wins and three losses in the past two series. Although the first series was taken by the Bears, the Dinos emerged victorious in the second series, not to mention the Bears was the first victim in the Dinos’ 15-game run.

Although the two will play another series before the end of the first half of the season, many KBO fans consider this week’s games slated from today to Thursday to be a prequel for this year’s Korean Series.