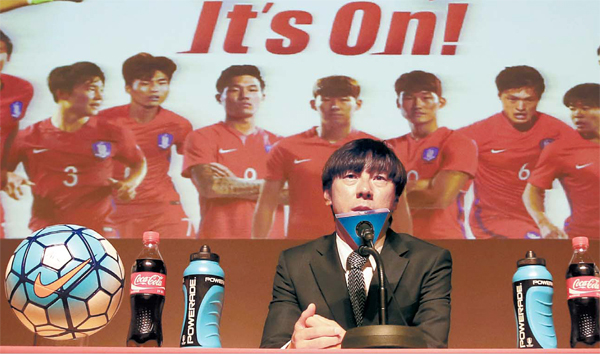 Korean Olympics football team manager Shin Tae-yong announced his final roster for the Rio Olympics on Monday. There was no twist, particularly in Shin’s selection of the wild cards for the team.

During a press conference on Monday in Seoul, Shin unveiled the final 18-man roster for the Summer Games. In the squad were Son Heung-min of Tottenham Hotspurs and Jang Hyun-soo of Guangzhou R&F, along with Suk Hyun-jun of FC Porto as previously predicted as wild cards.

The wildcard system, adopted from the 1996 Atlanta Olympics, allows up to three players older than 23 to play in the otherwise U-23 event.

Son and Jang had already been mentioned as wild cards before Monday’s announcement. What the fans anticipated was the last wild card, which Shin reportedly had trouble filling with a proper candidate. Initially, Shin sought to bring in defender Hong Jeong-ho of FC Augsburg to bolster its often-critiqued defense. However, as the clubs are not obliged to send their players for the Olympics since the tournament is not FIFA-sanctioned, Augsburg declined to make its defender available for August.

“I had Hong within our squad,” said Shin about his selection during the press conference. “I called Hong after we first earned our spot in the Olympics and he told me he will go no matter what and play his best. I didn’t worry. But it all went haywire when the team declined in the last minute. People question my selection, asking why I am taking only one defender. But we cannot place 10 wild card candidates into the 35-man reserve roster. We also have to take the U-23 players into consideration. So I decided to bring in a forward instead. Defense shouldn’t be a problem if we take time and organize it properly. People say our defense is weak but we have not conceded many goals in the past, not to mention all our shutout games.”

So, instead of strengthening its defense, Shin decided to add a striker to his squad, an unprecedented move by the manager of the Olympics team as Korea has never taken two offensive players as wild cards since the system was adopted, according to Yonhap News Agency. For the last quadrennial tournament in London, then-Olympics team manager Hong Myung-bo took with him a goalie, a forward, and a defender, who turned out to be essential in Korea’s run to finish third.

When asked about the background behind fielding Suk as the last of the wild card, the 46-year-old manager said “the decision essentially boiled down to Suk or Hwang Ui-jo of Seongnam FC. Suk had a brilliant showing for the senior football team during its European tour. He’s got the power and focus.” Shin was especially impressed with Suk expressing his determination for Olympics through the media before Shin made contact with Suk.

“We have players not being able to see much playing time in their clubs,” said Shin, expressing his concern about the team. “I would give this squad 70 points [out of 100]. The remaining 30 points, it is up to me to fill in that gap. The players [and I] will think about why we are halfway around the globe and what is expected [of us] by the people in Korea.”

Shin’s expectation for Son was especially notable. Marking his first Olympics, Son will likely boost the team’s offensive effort. He has scored 15 goals in 47 international matches for the senior team. “I will play him as a wing forward,” Shin said. “Son will arrive in Brazil by July 31. After conferring with the coaching staff, we have decided it would be difficult for Son to play in the first game against Fiji on August 5. We will put everything we have for the second game against Germany on August 8.”

The Olympics team right now is being criticized as possibly the weakest squad Korea has ever sent to the Games and Shin somewhat concurs. “Objectively speaking, our squad is less stacked compared to the squad back in 2012 London Olympics. We have four players who also appear in the senior national team games, of which three are wild cards. But we know what we have to make up for. Above all else, I offer my sincere gratitude to the clubs sending our wild cards to the Olympics.”