Koreans trail the region in shuteye

Koreans trail the region in shuteye 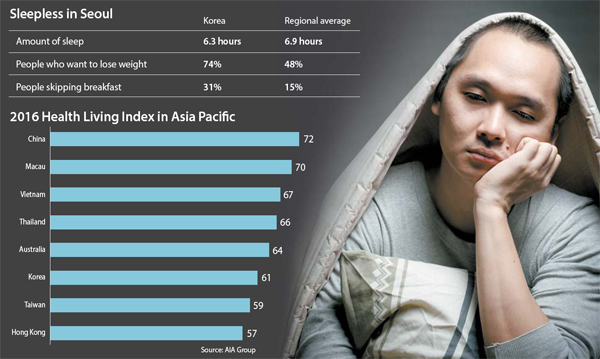 Koreans sleep the least number of hours of people in the Asia-Pacific region, according to recent data from an insurance company regional survey. On average, Koreans sleep just 6.3 hours per day.

According to AIA Group’s 2016 Healthy Living Index, Koreans want to sleep 7.5 hours a day but manage only 6.3 hours. The average among 15 countries in the region is 6.9 hours of sleep and a wish for an hour more.

Released Monday, the study noted that 53 percent of Korean parents complained that their children were not getting enough sleep. That is 10 percentage points more than the regional average of 43 percent.

Thirty-nine percent of Korean parents blamed their children’s internet habits for the lack of sleep, and 30 percent said the culprit was the need to study. Multiple answers were allowed. AIA surveyed 10,316 adults from 15 countries, including 751 from Korea.

On other health subjects, the survey said 74 percent of Koreans are not satisfied with their weight and want to diet. Taiwan had the largest proportion of people dissatisfied with what the scale tells them, at 76 percent. The regional average was 48 percent.

Eighty-one percent of Korean women and 66 percent of men said they wanted to go on a diet, hoping to lose 7.2 kilograms (15.9 pounds) on average. As to why they wanted to lose weight, vanity was right up there with health: 93 percent said health was their motive, and 91 percent noted a desire for a more shapely figure.

Thirty-one percent of Koreans surveyed said they skip breakfast, and only 40 percent said they ate enough fruits and vegetables.

Korea’s AIA stress index was calculated at 6.6, compared to the regional average of 6.2. Main sources of stress for Koreans were financial worries (81 percent), work pressure (80 percent), social life problems (67 percent) and concerns about health (66 percent). The specific health worry most frequently cited, by 71 percent of those with health worries, was cancer.

Korea scored 61 in a ranking of healthy lives in the region, placing it ninth among the 15 regional survey sites. That is a higher mark in Korea than in the 2013 survey, when Korea trailed the group with a score of 57.

Billed to the brim