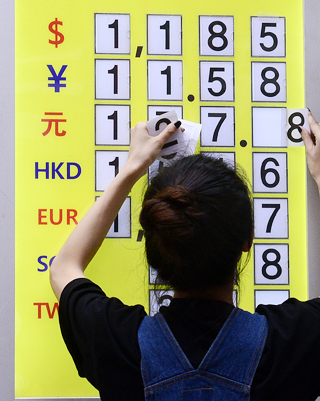 Korea’s equity markets have recouped some of the losses sustained after the United Kingdom’s unexpected vote to leave the European Union, but as of Monday, the won-dollar exchange rate remained volatile.

The main exchange, the Kospi, hit the psychologically important 1,900 level early in the day, dropping as much as 23.62 points within two minutes of the opening.

But as the day progressed, fears over the so-called Brexit began to subside. Institutional investors eventually bought shares to push up the index to close 1.61 points or 0.08 percent higher than on Friday.

The Korean market wasn’t the only one that appeared to be recovering on Monday.

The gains were thought to be in large part due to swift action by the global financial community, particularly the pledges by central banks over the weekend to curb the aftershocks of Brexit.

Jaime Caruana, head of the Bank for International Settlements (BIS) - known as the central bank of central banks - stated during the BIS annual meeting last weekend that it was willing to activate “extensive contingency plans” to limit market turbulence driven by the Brexit decision.

The Bank of Korea (BOK) will play its part in stabilizing the local market by supplying 3 trillion won in liquidity as a part of its open market operations. 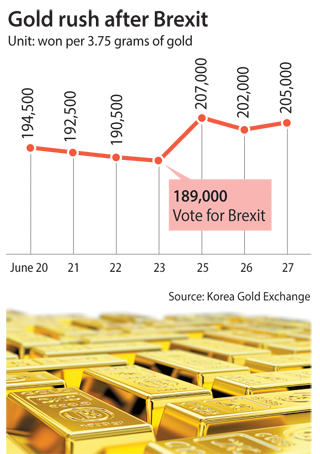 The decision came out of an emergency meeting attended by BOK Gov. Lee Ju-yeol, who made an early return from the BIS meeting on Monday.

“Although the markets saw high volatility, the market is functioning normally, considering the amount of transactions in foreign currencies and securities,” Lee said.

Still, he warned that Brexit will continue to loom over Korean markets and the economy.

“Korea is bound to be exposed to the negative effects of Brexit due to its higher exposure to foreign investors.”

One sign of the Brexit’s impact was the wildly fluctuating won on Monday; the currency weakened by 2.4 won to close at 1,182.3 against the dollar due to investors’ preference for haven assets like the dollar.

Dollar deposits from Korea’s five major bank accounts reached $33.19 billion as of June 22, increasing by over $ 2 billion in less than a month.

The price of gold, another major haven asset, also climbed to a record level.

The price per gram exceeded 50,000 won during Monday’s trading for the first time since record keeping began in 2014.

Gold prices soared to an almost two-year peak on Friday after the results of the British referendum were announced.

But some say that aftershocks from Brexit are far from over.

Daishin Securities and Hana Financial Investment predicted that the Brexit issue could push the Kospi to the 1,850 level or lower because investors will likely sell for the time being.

“The fallout of the Brexit may bring the Kospi down to 1,850, the level seen during the rout from China’s market this year,” said Lee Kyung-min, an analyst at Daishin Securities. “The index will be stuck in that range unless the aftershocks have a negative impact on the country’s fundamentals.”

Financial authorities and the government have been working to soothe the market.

President Park Geun-hye said Monday that the government is doing everything it could to protect the Korean market.

Finance Minister Yoo Il-ho stressed that the government would closely monitor the impact that Brexit will have on both the Korean and global financial markets.