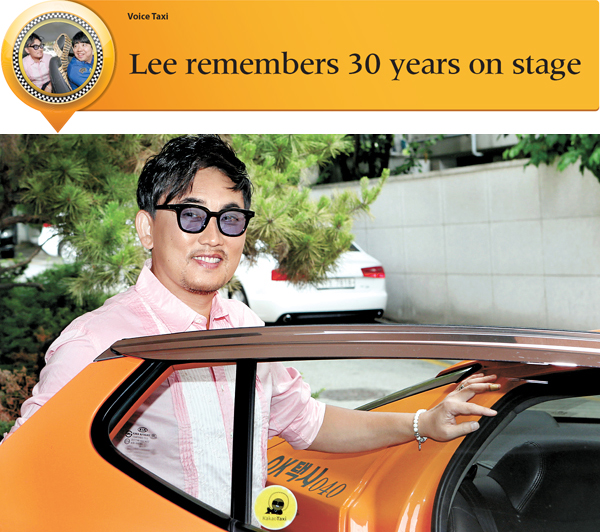 As part of the JoongAng Ilbo’s “Voice Taxi” series, Lee Seung-chul talks about his 30-year career as a musician. He advises young people that a positive attitude and strong will are necessary to thrive amid harsh times. [CHOI JEONG-DONG]

It has been 30 years since Lee Seung-chul debuted as a singer, but he still performs on stage with the same passion and vigor he showed in 1986.

Unlike many of the other musicians he debuted with, Lee doesn’t linger on past achievements. Instead, he releases a new album almost every year and typically performs around 30 times.

It’s a schedule that can rival even the biggest contemporary idol groups, and that’s no accident - Lee says he thinks his biggest competitor is Taeyang of the boy group Big Bang.

To get a sense of the man behind the music, the JoongAng Ilbo recently interviewed Lee on his way to the recording studio as part of its “Voice Taxi” series.

In the series, the reporter doubles as a taxi driver and conducts the interview as they drive around Seoul. The casual, nontraditional format lets subjects open up about whatever’s actually on their minds.

Through his 30 years as a musician, Lee has had his share of difficult days - trials and errors, anguish and pain. But those experiences taught him to live his life like a young person, and during the interview, he advised young people to focus on living their lives rather than waiting around to get older.

For part of the ride, Lee was joined by two fans who were born the same year he debuted. They were given the opportunity to ask the singer questions they’d long been curious about.

The interview has been organized around Lee’s most famous songs.

One of Lee’s biggest hits focuses on the passage of time.

“Time goes fast that the days [of the past] seem just like yesterday,” Lee sings. “I miss the old days whether good or bad, so I cry. Time goes fast like an arrow.”

Lee says his 30-year career has felt like it passed quickly, but it hasn’t been easy.

“Musicians have their own unique ways of living that sometimes it seems quite incomprehensible to others,” Lee said. “Their behaviors are too self-righteous or obstinate, but such attitudes are sometimes necessary in order to make their music.

“But I think I concentrated more on standing out, being very pretentious. Due to scandals, my career essentially ceased to exist between 1990 and 1995. I could not make public appearances,” Lee added.

“So there were difficult days, but I was able to overcome them somewhat successfully. Time flew by so fast. Considering my second daughter is already 10 years old, time really does fly like an arrow.”

Lee didn’t give up when he couldn’t appear on TV programs, even though it seemed like a fatal blow to his career. Instead, he held as many concerts as possible to meet his fans and keep himself in the public eye.

“I did so many concerts that I was on the verge of suffering from nodules on my vocal cords,” Lee recalled. “I did four concerts a week on average. And those difficult days actually made me who I am today. The 10-year-old boys and girls back then are now in their forties, and they bring their children to my concert.”

It is rare for musicians who debuted 30 years ago to still work with this kind of fervor, but it’s the continuation of his will not to be forgotten by the public.

He advises young singers not to act pretentiously because that’s the quickest way to be forgotten. As a judge on the TV audition program “Superstar K,” he has said this to many burgeoning stars.

“Artists on the show think that if they win, they’ll instantly become famous. That’s not how things go,” Lee said. “They need to learn how to ingratiate themselves with the public, because this is the only way to be remembered for a long time.”

Lee also emphasized that celebrities need to understand what the public is truly thinking because in the Korean entertainment world, out of sight truly equals out of mind.

So, he tells singers not to be overly proud of themselves when they find success in the present. They need to work hard to continue to stay relevant. He adds that hateful comments are better than no comments at all, and that people who want to become famous can’t be afraid of becoming the center of gossip.

Lee has worked a lot in the first half of 2016. In April, he released the single album, “Diary.”

Now, he is on the nationwide tour to celebrate the 30th anniversary of his debut.

“I’m not just planning on going to big cities, but I’m also going to play in remote areas like Ulleung Island, North Gyeongsang and Mara Island off the coast of Jeju Island,” Lee explained. “Then, on July 1 and 2, I’ll hold concerts at Olympic Park Gymnastics Gymnasium in southeastern Seoul.”

An hour into the drive, traffic had slowed to a crawl. The conversation turned towards young Koreans today, many of whom are struggling with high unemployment rates and a lack of options.

The singer referenced the lyrics to his hit “Amateur,” such as “Nobody teaches you, and as this is the first time you are standing in this place - we all are the same amateurs in this world.” He hoped they could serve as a kind of consolation to young people who lack hope.

Lee said he thinks every generation faces its own set of problems, but argued that those difficulties can give rise to opportunities to think outside the box.

“The significance of having a prestigious academic background has been reduced these days,” Lee said. “As society develops, the categories of jobs diversify. So there are wider choices for people to consider.

“Moreover, people need to make their own opportunities in society by maintaining a positive mindset. When I was deprived of opportunities to appear on TV, I overcame this by not giving up on hope.”

Lee advises people in their thirties to be both optimistic and pragmatic. He knows this isn’t easy, but argues it’s essential to creating opportunities. He says the key is eagerness, meticulous preparation and a love of working hard.

According to Lee, breakthroughs always come to those who keep fighting to find a way. And while sometimes unpleasant work must be done, it passes, and memories of the struggle fade with time. This, Lee said, is what he has learned over the past 30 years.

After a while, a huge fan of Lee got into the taxi. Lim Eun-ah, 30, works in a government administration office. She listened to Lee’s music all throughout middle school.

“I couldn’t sleep last night thinking how miraculous it is that I’d get to meet Lee,” Lim said. “I cannot believe that Lee is right beside me. It is a great honor to meet him.”

When Lim listens to his tracks, she’s most drawn to the stories of bygone love.

She pointed to “Never-ending Story,” in which she said she can feel the ambivalence of someone torn between wanting to see an ex-lover while also feeling angry towards them.

“[But] my favorite Lee song is ‘Fate’ because there are many parts I agree with,” Lim said. “I’m curious how Lee can manage to create songs like these while keeping such a busy schedule.”

Lee replied that taking breaks actually makes it harder for him to get back to work, so he purposefully tries to have at least one concert a week.

“Musical instruments and vocal cords should be constantly used so that you can retain the confidence. Consistency is very important,” Lee said.

After Lim got out, another fan hopped in the taxi. Jung Hui-beom, also 30, is a doctor of traditional Korean medicine.

“When I was an undergraduate student, my close friend was fond of listening to Lee’s music,” Jung said. “So naturally I began to listen to the tracks as well, and I became a big fan. I like to sing ‘Jasmine Flower’ when I do karaoke.”

With his wedding coming up in November, Jung listens a lot to “My Love.” He asked Lee to give him a advice on married life.

“The balance between work and love is very significant in married life,” Lee said. “I hope your fiancee is an office worker too. And promise me that you will only love your wife.” 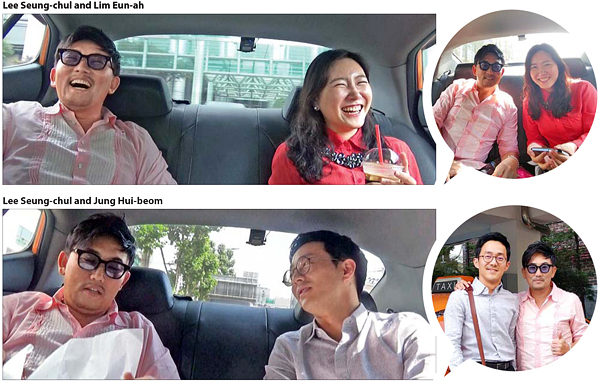