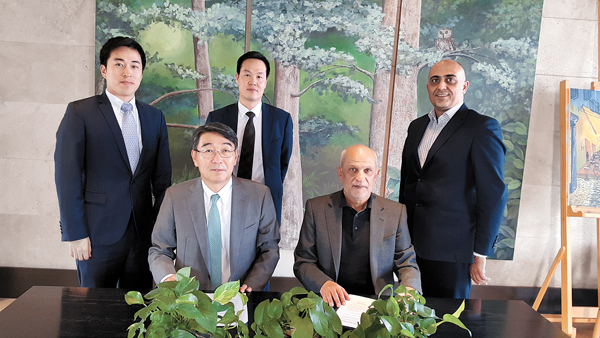 It is the first time that an overseas company has inked a deal with Iran on a water desalination project since the sanction imposed on the Middle East country was lifted this year.

“We were able to win the construction bid for SAKO thanks to the Korea-Iran diplomatic summit held last May and the company’s continuous efforts to expand its businesses in Iran,” said Yun Seok-won, head of Water BG Group at Doosan Heavy Industries. Before the summit the company had signed a memorandum of understanding with National Water and Wastewater Engineering Company of Iran in April to cement a partnership in water businesses with Iran.

The Iranian water business is expected to grow into a $2 billion market by 2018, the company said.

Once completed, the plant will be capable of desalinating 200,000 tons of seawater a day via reverse osmosis technology. This will be enough to supply freshwater to 670,000 residents in the Bandar Abbas area. Reverse osmosis technology is a way of purifying water, such as sea water, by using a semipermeable membrane to remove ions, molecules and larger particles.

The Korean company will be responsible for the entire construction process including the blueprints of the plant, material supplies, test runs and maintenance.

The plant is scheduled to be completed by October 2018 with the maintenance contract lasting 12 years until 2030. “We will use this first bid in Iran as a stepping stone to aggressively expand our presence in the Iranian water industry,” Yun said.

Industrial ties between Iran and Korea have strengthened amid President Park Geun-hye’s economic mission to Iran last month which resulted in 66 memoranda of understanding mostly in business deals involving infrastructure construction projects and energy exploration, as the country is in need of infrastructure development after the recent release from sanctions.

Prior to the Iranian deal, Doosan Heavy Industries also landed a 450 million won worth deal to construct a Doha Phase One desalination plant in the Kuwait in May 2015.