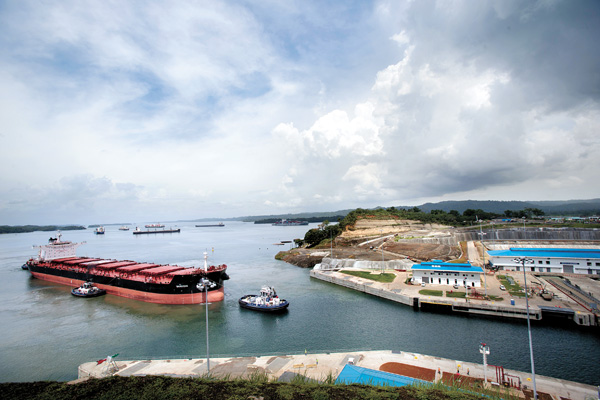 A cargo ship that can take advantage of the widened Panama Canal, the Malta-flagged Baroque, arrives Friday at the Agua Clara locks on a test of the upgraded canal. [AP/NEWSIS]

The Panama Canal connecting the Atlantic and Pacific Ocean reopened on Sunday after nine years of construction to expand the canal’s capacity. The inaugural ceremony was marked by the transit of a Chinese vessel, COSCO Shipping Panama, with a capacity of 9,400 twenty-foot equivalent container units (TEUs).

The canal, 82 kilometers (51 miles) long, is now 70 feet wider and 18 feet deeper, doubling the waterway’s capacity thanks to more than $5 billion provided by Panama’s government.

The widened passage means that bigger vessels carrying more cargo can pass through. The old size limit was vessels 294 meters in length and with a 32-meter beam; after the expansion, vessels of up to 366 meters in length with beams of 49 meters can use the locks. Container ships, previously limited to carrying 5,000 TEUs, can now carry up to 14,000 TEUs.

But shipping lines in Korea are concerned that the new facility may cause problems for the industry, already in recession, because the revamped canal could spur a heated race to build larger vessels that can carry cargo at a lower price.

The canal opens up sea lines to the eastern parts of North and South America, such as New York and Brazil. With the larger transit capacity and shorter sea routes to the Americas’ east coasts from Asia, competition among shipping lines will increase.

Sea routes to the Americas account for 40 percent of Hanjin Shipping and Hyundai Merchant Marine’s business, but Korean lines don’t have enough of the larger vessels to exploit the new routes the canal will open up.

Maersk Line, a Danish container shipping company which owns extra-large vessels enough to carry 15,000 TEUs of cargo, has already announced that it will move its seaways to the Panama Canal.

The largest ships Korean companies had on trans-Pacific routes were 4,500-TEU class, but Hanjin said it has now deployed ships of double that capacity on routes to the Americas. It plans to watch the widened canal for a while and then make further plans.

Redeploying larger ships to the new routes through the canal is not a complete solution, because Europe-America routes are very competitive; smaller ships mean fewer economies of scale across the Atlantic. The nation’s shipping lines might find larger ships to buy or lease, but decisions they made a few years ago when the industry outlook was rosy have resulted in a restructuring effort that is now ongoing.

The canal is also likely to spur cuts in shipping rates because of economies of scale.

“The expansion is very likely to result in larger ships and oversupply on sea routes,” said Kim Woo-ho, a researcher at Korea Maritime Institute. “Shipping lines may suffer from decreasing profits due to shipping cost declines.”

The industry’s concerns also include that of larger ships pushing mid-size ships, such as 45,000 TEU container ships, to regional routes that are now usually dominated by 1,000 to 2,000 TEU ships. This could lead to a domino effect of shipping cost declines on regional routes as well.

“If international trade increases, shippers will of course prefer carriers with bigger ships,” said Joh Bongiee, managing director at the Korea Shipowners’ Association. “Smaller ships are less economical and the change [a preference for bigger ships] could bring about a dislocation of ships on all routes.”

Still, some people in the Korean industry see a silver lining for the Korean economy. Shipbuilding yards here could see new demand for the 14,000 TEU ships that can use the Panama Canal, giving some much-needed new business to the struggling sector.

“This doesn’t mean shippers will go order bigger ships just because the canal allows passage of bigger ships,” a Hyundai Heavy Industries spokesman said. “But in the long term, when the industry sees a little recovery, the expansion could bring more profits to the nation’s shipbuilders.”