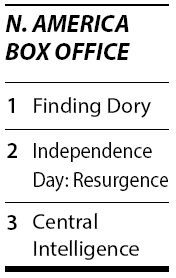 NEW YORK - The “Finding Dory” tidal wave overwhelmed the sputtering sequel “Independence Day: Resurgence,” as the alien-invasion redux was drowned out by the popular Pixar release in North American theaters.

In its second week, “Finding Dory” easily remained on top with an estimated $73.2 million, according to studio estimates Sunday. That far surpassed the $41.6 million opening of “Resurgence,” which debuted well off the pace of its 1996 original.

The first “Independence Day” opened with $50.2 million, or about $77 million in inflation-adjusted dollars.

Of the week’s other debuts, the Blake Lively shark thriller “The Shallows” rode a wave of good reviews to a better-than-expected $16.7 million for Sony.

In a weekend full of ups and downs, the opening of “Independence Day” was the most closely watched debut.

Long pegged as one of 20th Century Fox’s tentpoles of the season, it had once been expected to be one of the summer’s biggest films.

A proud popcorn movie, directed, like the first “Independence Day,” by Roland Emmerich, “Resurgence” brought back much of the original cast with the significant exception of Will Smith.

Without him, the sequel doesn’t appear likely to match the $817.4 million global haul of the original.

Chris Aronson, head of distribution for Fox, acknowledged the result was “on the lower side of our prognostications.”

“Resurgence,” however, took in $102 million abroad, where it - ironically, for a movie named after the United States’ declaration of independence - is doing better business.