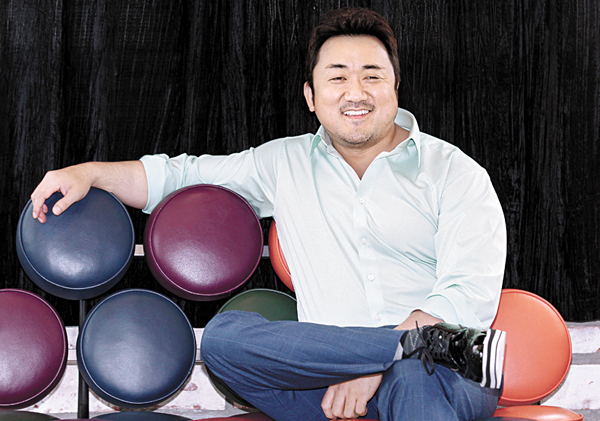 Ma Dong-seok is undeniably macho, but that hasn’t stopped fans from giving him a slew of cutesy nicknames in recent years.

It is a portmanteau of his family name Ma and yeppuni, which literally translates to “a person who is pretty,” but can also be used as a term of endearment.

The nickname came from actress Kim Hye-soo when the two worked on the upcoming family film “Familyhood,” slated to hit theaters nationwide on Wednesday. 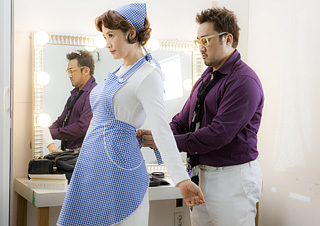 Ma, right, plays the role of a fashion stylist in the upcoming film “Familyhood.” [HODU&U ENTERTAINMENT]

Ma plays a fashion stylist named Pyeong-gu, who cares lovingly for his longtime friend, the actress Ju-yeon (played by Kim).

After breaking up with her actor boyfriend, Ju-yeon decides to become a mother and start a family of her own. She soon finds herself embroiled in all kinds of scandals, and the only person who sticks by her side is Pyeong-gu.

Whether playing the funny man or a serious role like a detective or murderer, Ma is known for adding human touches that make his characters realistic and relatable.

Ilgan Sports, an affiliate of the Korea JoongAng Daily, sat down for an interview with Ma.

Q. Your new project is a light-hearted comedy unlike your previous work “Deep Trap.”

A. I have higher expectations for this film because it is a hilarious, heart-warming story. I can’t tell people to watch my films when they are extreme stories, but I highly recommend this because it is suitable for families.

You play the role of a fashion stylist. Did you refer to any specific person?

I have no interest in fashion or style, and I needed to know how fashion stylists dress up themselves. I’m close to stylist Kim Sung-il in person, so I created my character based on him.

I also imitated the style of fashion stylist Jung Yoon-ki and wore thick-frame glasses just like him. This character is a stylist, but he also does the job of a manager. I found that actresses talk a lot with their stylists and managers while on the go.

Is it true that you wore makeup for the first time for this role?

Yeah. I’ve been playing roles which require either special-effects makeup or no makeup at all.

How come you have so many cute nicknames like Mappenui and Mavely [a portmanteau of Ma and “lovely”]?

I started getting these kinds of nicknames when I was working on the drama series “Bad Guys” for OCN. That character wasn’t cute at all, and I still don’t know why people started, but I appreciate the interest in me.

She’s different. She cares a lot about other actors and the production crew. I realized why many actors look up to her.

Your next film “Train to Busan” received rave reviews at the Cannes Film Festival. Do you plan to make a foray into Hollywood?

I have a friend who is running a talent agency in the States. He said he’s receiving more inquires [about me] from major studios after the film was screened in Cannes. I told him, “I’ll keep working hard in Korea, and you do your work there.”

I’m involved in many projects here, and I can’t give up on them to head to Hollywood.

I believe chances will come naturally, and I will definitely audition for roles given the opportunity.