‘Resurgence’ debuts at top of the local box office

‘Resurgence’ debuts at top of the local box office 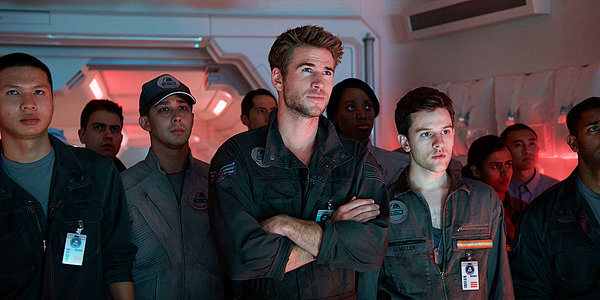 Hollywood blockbuster “Independence Day: Resurgence,” the long-awaited sequel to “Independence Day” (1996), debuted on top at the local box office with 699,672 tickets sold over the weekend.

The film played across 926 screens nationwide and accounted for 35.6 percent of tickets sold, according to the Korean Film Council on Monday.

In the film by Roland Emmerich, who was behind the similarly cataclysmic “2012” (2009) and “The Day After Tomorrow” (2004), the earth once again faces invasion by the same alien forces that arrived two decades earlier.

In an attempt to appeal to fans both old and new, much of the original film’s cast reappears, including Bill Pullman, Jeff Goldblum and Brent Spiner, alongside younger stars like Liam Hemsworth. 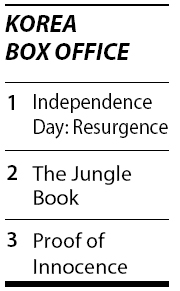 Walt Disney Studios’ “The Jungle Book” dropped to second place, but still saw an impressive 350,566 tickets sold in its third week to total 18.9 billion won ($15.9 million) in sales so far.

American horror sequel “The Conjuring 2” took fourth, while Korea’s “The Handmaiden” by director Park Chan-wook stepped down to the fifth.

Many local newspapers predicted last week that “The Handmaiden” would see ticket sales suffer because of rumors that lead actress Kim Min-hee is having an affair with director Hong Sang-soo, who is both 22 years her senior and married with a child.

But the thriller seemed immune to the scandal, only seeing a drop in sales similar to the other top four films and finally reaching four million tickets sold in its fourth week - particularly notable for a film rated 19 and over.

Korean film “The Truth Beneath” debuted in sixth. It is the second feature by female director Lee Kyoung-mi, who swept local film festivals with her directorial debut “Crush and Blush” in 2008.

Starring Son Ye-jin, “The Truth Beneath” shows a new side of the actress, whose past roles have been characters both highly feminine and fragile.

Other films that made the top 10 were romantic drama “Me Before You,” crime drama “Criminal” and action fantasy flick “Warcraft: The Beginning.”

Korean film “The Wailing” came in 10th in its seventh week.