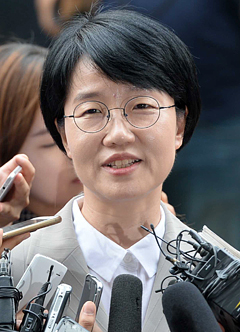 Rep. Park Sun-sook, former secretary general of the People’s Party, speaks to reporters at the Seoul Western District Prosecutors’ Office as she was summoned to the prosecution Monday morning. [NEWSIS]

As questions snowballed over the integrity of the two main opposition parties, heads of the Minjoo Party of Korea and the People’s Party each issued apologies over the embarrassing power abuse scandals by their lawmakers.

Acting Chairman Kim Chong-in of the Minjoo Party apologized Monday morning at an interim leadership meeting for the latest allegations involving Rep. Seo Young-kyo. Seo, a two-term lawmaker, was discovered last week to have hired her daughter as an intern in her parliamentary office for five months in 2014. Seo also hired her older brother as the accounting manager of her supporters’ association and her younger brother as a secretary, a fact that was already revealed last year.

“We will take necessary action after an internal audit,” Kim said. “We must stop thinking that ethical insensitivity is allowed when we have a certain goal and when the goal is just,” Kim said. “Or we can never avoid criticism and we can never win the people’s hearts.”

Rep. Woo Sang-ho, floor leader of the party, also said the party will conduct a case study to prevent the recurrence of similar scandals. “The obsolete practices such as hiring a lawmaker’s family members as aides and fundraising issues will be reviewed and we will create guidelines,” he said.

Chairman Ahn Cheol-soo of the People’s Party also issued an apology on Monday during the party meeting over the party’s political kickbacks scandal. “No matter what happened, I am issuing a serious apology,” Ahn said. “Based on the outcome [of the prosecution’s investigation], I assure everyone that we will deal with it.”

It was the third apology issued by Ahn since the party was embroiled in a corruption scandal. Rep. Kim Su-min, the party’s youngest lawmaker and newly elected proportional member to the National Assembly, has been investigated by the prosecution over allegations that she received illegal political funds during the April 13 general election campaign.

Kim was in charge of public relations for the newly formed Ahn’s party at the time and was accused of receiving kickbacks from advertisement companies during the general election in violation of election law. Other senior party officials were also being investigated over the scandal.

Rep. Park Sun-sook, the party’s former secretary general, was summoned to the prosecution Monday morning. Her deputy, Wang Ju-hyeon, was questioned last week. Kim claimed she was forced by Wang to receive kickbacks from advertisement companies, making the scandal a matter of the People’s Party and not her own individual irregularity.

The People’s Party’s leadership meeting was unusually brief on Monday, as other leaders refrained from speaking. It ended after five minutes.

The scandals put the two parties in a particularly embarrassing position, as both had pledged during the election to surrender lawmakers’ privileges and resolve issues such as the widening wealth gap. They also attacked the conservative ruling Saenuri Party and the establishment and promised a new way of doing politics.

Although the two parties vowed to deal sternly with the scandals, criticism grew that they unwillingly and unsatisfactorily responded to the scandal cases.

Allegations were already raised before Seo received the nomination for reelection, but the party eventually made her a candidate. The People’s Party also tried to downplay the situation by launching its own internal probe earlier this month and clearing Rep. Kim of any wrongdoing. The party insisted on its own innocence, too, though the prosecution was still investigating the case.

The minority opposition Justice Party on Monday railed against its two liberal partners.

“Based on what we know so far,” Chairwoman Sim Sang-jeong of the Justice Party said, “the People’s Party’s kickbacks scandal and Minjoo Rep. Seo’s hiring of families are clear abuses of power.”

Sim added, “The general election outcome showed that we should stop the abuse of power and foul play by the establishment, which destroyed the community and caused ordinary people much pain. But the opposition parties, which should take these requests seriously, are now marred in these embarrassing scandals.”

She also said it is even more disappointing and frustrating to see how the leadership of the two parties are dealing with the scandals. “They are just blaming the usual practices,” she said, “trying to minimize the damage, and waiting it out.”