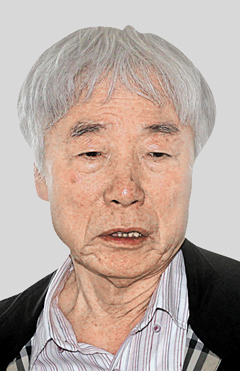 The renowned modern artist Lee Ufan appeared at the Seoul Metropolitan Police Agency on Monday to determine the authenticity of 13 suspected forgeries amid a crackdown on counterfeit artwork.

Since the end of last year, police have raided galleries in Seoul suspected of circulating fake Lee Ufan paintings. They were initially tipped off that between 2012 and 2013, forgeries of Lee’s pieces were being sold at galleries in Insa-dong, central Seoul, for billions of won.

This included major pieces such as “From Point” and “From Line.”

The Seoul Metropolitan Police Agency at the beginning of the year confirmed the forgery of a certificate of authenticity for Lee’s 1978 painting “From Point No. 780217,” which was auctioned in December.

On April 18, Seoul police arrested a 66-year-old art dealer surnamed Hyeon, the individual who was chiefly responsible for the circulation of the counterfeit Lee Ufan pieces.

Hyeon initially fled to Japan, but with the cooperation of Japanese police, he was repatriated in May. He confessed to police that he had forged and distributed copies of “From Point” and other Lee Ufan works.

Hyeon, who headed a gallery, worked with an antique dealer and a forger. They earned some 1.325 billion won ($1,123 million), according to police. Two other gallery owners were also indicted without detention.

On June 2, after appraisals from civilian experts as well as the National Forensic Service, Seoul police determined that the 13 confiscated works, including “From Point No. 780217,” were forgeries.

Lee resides in Paris but returned to Korea on Sunday as the counterfeit artwork case unfolded. He initially expressed annoyance that police determined certain paintings to be forgeries without consulting him first, pointing out that he had written the authentication certificates for some of them. Upon arriving at Incheon International Airport, he even said he did not have any intention to appear before police.

Lee took time on Monday to determine for himself if the works in question are indeed fake, but he said he needs more time to confirm if the confiscated paintings are all forgeries.

“I have examined all the paintings,” Lee told reporters after appearing at the police agency. “I will visit police again [on Wednesday] to give my verdict.”

“We have seen all 13 pieces that have been determined to be forgeries, and there are areas that are difficult to determine, so we will delay stating our position,” Lee’s attorney, Choi Sun-yong, said.

Choi elaborated that Lee did not paint the same kind of pictures and used many different types of paints, so he wanted to check such areas and compare them with his actual pieces before reaching a conclusion.

Because they are abstract works, he said it is more difficult to verify their authenticity right away.