FC Seoul skipper has high hopes for his team

FC Seoul skipper has high hopes for his team 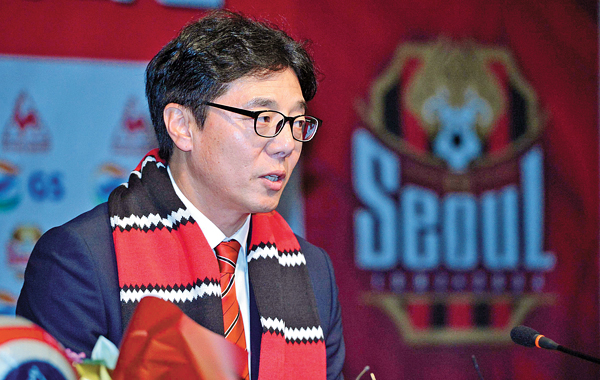 Hwang Sun-hong, the new skipper of FC Seoul, has a dream. He hopes to turn FC Seoul into a club worthy of representing the K-League Classic, like Bayern Munich of Bundesliga.

“Why is there no team akin to Munich in the K-League?” asked Hwang during his inaugural press conference on Monday. Bayern Munich is an elite team of Germany’s Bundesliga, representing not only the city of Munich but German football as whole. In his inauguration event on Monday, Hwang vowed to turn FC Seoul into a club like Munich by killing three birds with one stone - records, playing style and the hearts of the fans.

After the former manager Choi Yong-soo tendered his resignation to join China’s Jingsu Suning FC, Hwang came to helm FC Seoul as its 11th manager. During the press conference on Monday, he made clear his vision and philosophy for the Seoul-based K-League team. Particularly, he is determined to integrate the experience he gained from his recent coaching training in Germany.

“I felt and learned a lot while in Germany,” said Hwang. “What troubled me was the realization that Korea essentially lacked an unrivaled club such as Munich. Munich is a team children long to join and fans adore.”

“I firmly believed that FC Seoul could be like that in the K-League and that’s why I chose Seoul,” he added, explaining his motivation behind joining Seoul as the new manager.

At the moment, the new skipper is to continue with the team’s shot at the triple crowns: the K-League, Asian Champions League (ACL) and FA Cup. “Choi strengthened the team and all I need to do now is incorporate my style to make it better. I am sure we can excel,” Hwang said.

Along with wins, Hwang is also determined to make Seoul football more exiting by bringing in his signature style “tiki-taka.”

Tiki-taka is a style of play in football characterized by short passes and active movement. Players on the pitch work the ball through various routes and shift around their positions to maintain ball possession as much as possible. This allows them to be in control of the tempo of the game.

“Meticulous and fast football. Active and energetic football. That’s my philosophy,” Hwang added. “My style will not change much with Seoul. I plan to work with the players to offer the fans more exciting plays.”

He added, “Seoul’s fan-base is large and we need to show them plays and records worth the name of this city. We have no intention of backing down during the ‘Super Match’ against Suwon Samsung Bluewings.”

And the stone Hwang plans to use to catch his three birds is the forward trio of Carlos Adriano, Dejan Damjanovic and Park Chu-young. “They are the nucleus of Seoul’s offensive,” Hwang emphasized. “This is the offensive lineup that represents the entire league. I hope to create synergy among them, and by doing so, we can become the best team in the K-League.”

The start of the “Bayern Munich of K-League” effort can be witnessed beginning from the 17th round match of the K-League Classic against Seongnam FC on June 29. This is the debut match for Hwang. “I have only two days to work with my players. My goal is to streamline our communication.”