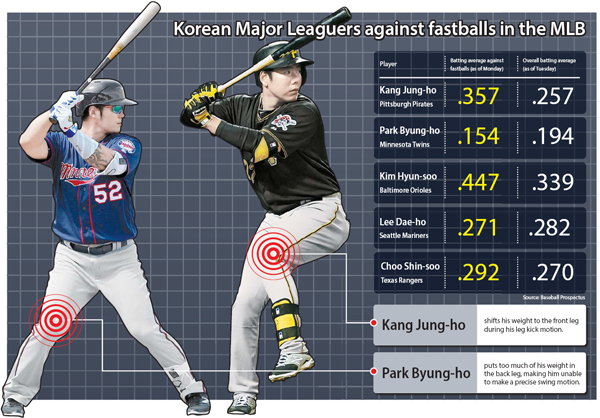 The Major League is full of pitchers throwing lethal fastballs, some even exceeding 100 miles per hour in velocity. A batter’s value is often decided, among many other things, on how he performs against these bullet pitches. The same goes for the Korean big leaguers, including Park Byung-ho of the Minnesota Twins and Kang Jung-ho of the Pittsburgh Pirates. At the end of the day, everything boils down to the mentality and swing form.

Twins first baseman Park was at bat in the ninth inning against the New York Yankees at Yankee Stadium on June 25. The Twins were behind during the game, 5-3, when Park found himself on the plate. Yankees closer Aroldis Chapman was on the mound, ready to strike out Park with his signature fastballs. Chapman lived up to his nickname “Cuban rocket” and retired Park quickly with three four-seam fastballs that averaged 102 miles per hour. By all means, this was one of the most crushing big league moments for Park who turned around and walked back to the dugout with his head down.

In comparison, one of the most memorable big league moments for Pirates shortstop Kang, a close friend of Park who insisted that Park try his hand in the Majors, was, ironically, against Chapman. “I want to go against Chapman,” Kang said before he left Korea to join the big league. This wish came true on May 7 last year and Kang, a fearless rookie in the Majors then, belted a double off Chapman’s 100-mile-per-hour four-seam fastball. Kang’s swing form was embroiled in controversy then, especially because of his high leg kick. Kang would lift his front leg high and stomp it on the ground as he shifted his weight from the back leg while swinging his bat.

This season, Kang is often batting fourth for the Pirates. The fourth player in the batting order is called a cleanup hitter, a position designated to one of the best hitters in the team. To take up this position, the player must have slugging ability to drive in runs with extra-base hits. Kang’s batting average is not exceptional; he finished last season with a .287 batting average (BA). As of Tuesday, Kang’s BA stands at .257. But Kang’s more of a slugger than a leadoff or contact hitter. Since he returned to the field after a season-costing injury last year, Kang played in 43 games and sent 11 homers over the fence. His slugging ability, particularly against fast pitches, is especially prominent when the team is in a scoring position. Last year, Kang recorded a .422 BA against fastballs exceeding 95 miles per hour. The faster the pitches that come to his way, better he performs. Insiders who were pessimistic about Kang, saying he wouldn’t be able to make contact against fastballs in the big league, were proven wrong.

But for Park, what worried the experts became reality. For almost a month now, he’s been shut down by the MLB pitchers. He cranked nine home runs in 29 games up until May 14. Then things began to fall apart, it seems, smashing only three dingers since then. What’s more unsettling is that out of the 12 home runs, only one came against fastballs traveling more than 95 miles per hour. Park’s weak point has been compromised and his BA took a heavy blow, falling to .194.

Essentially, the difference in their performance against fastballs led to the discrepancy in their overall performance. Park did fine against KBO’s fastballs traveling more than 90 miles per hour in velocity. His BA against these pitches was .393, far surpassing the league average .277. But apparently, five-mile-an-hour difference was enough to throw off Park.

Physically speaking, Park is well equipped but it is mental factor and technique Park needs to work on. “Kang also needed time to adjust,” said Kim Yong-dal, former Golden Glove winner and a batting expert. “Once Park makes a proper adjustment in terms of mentality and technique, it will not be a problem for him to hit fastballs.”

“He does what we call guess hitting,” added Kim. “But if he is mentally drained, he swings his bat slower, missing the timing to make contact.” What Kim is indicating is that although Park’s batting speed is enough to handle MLB fastballs, the preparation process before he actually swings the bat is being delayed, largely because of a mental factor.

“Too much of his weight is on his back leg,” Kim added. If Park shifts 30 percent to 40 percent of his weight to the front leg, his swing would become more concise. Kang precisely does this, although his leg kick motion became less drastic than before.

For power hitter Park and Kang, they have a lot to learn from Lee Dae-ho of the Seattle Mariners. Lee’s swing speed is rather slow, but he is deft in selecting pitches and guess hitting. “Lee changes his posture slightly before he swings his bat,” according to Kim. “He is also very flexible. [His smooth swing motion] enables Lee to hit MLB fastballs.”