Not learning from failures

Not learning from failures 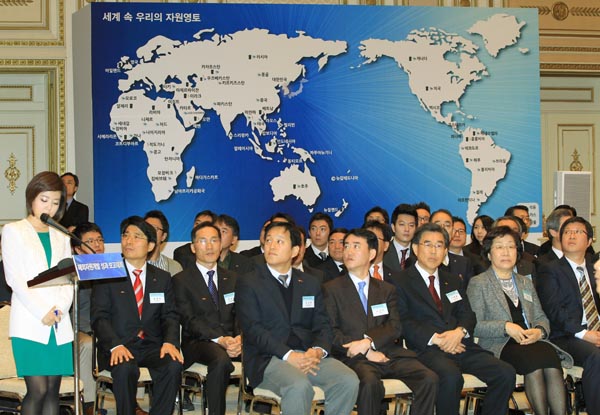 Government officials and industry leaders listen to a briefing about Korea’s accomplishments in overseas resources development at the Blue House in 2012. [JOINT PRESS CORPS]

Korea is a country with little natural resources. Securing energy resources through overseas resources is like buying the minimum insurance in the competition against giants like China, Japan and India. When the price is low, cost of energy import is reduced, and when the price is high, we can secure stable import and increase resources exploitation earning. When operated properly, it could be a win-win project. However, for nearly 40 years, resources development policy fluctuated depending on the tendency of the government. So a vicious cycle, not a good one, has become established.

Ever-changing resources development policies according to the change of the administration resulted in wasting taxpayers’ money.

People’s distrust grew, and justification and drive for consistent development were lost. But past administrations did not resolve this irresponsibly and rather encouraged the discontent. They ignored the characteristics of resources development public corporations and conducted standardized inspection and evaluation and sent officials without expertise to head the corporations. As a result, they made the employees at the public corporations into soulless avatars. Without changing this practice, overseas resources development would be inconsistent. The loss from blaming each other and missing the golden time would have to be assumed by the citizens.

Successful resources development is only possible when sizable agencies with solid funding are guaranteed to have expertise and independence and work for public good. As in most other countries, it would be inevitable to have state-run companies to take major roles. Government’s consistent policy implementation and establishment of support system should be accompanied by public corporation’s efforts to be independent from government’s intervention and control based on professional expertise. What we need is the attitude to resolve the essence of the problem, not hiding or avoiding them.

It is only justifiable to promote enlargement of businesses in order to overcome high risk and uncertainty. The 30 to 50 percent of the 30 biggest companies listed in stock markets around the world are energy companies. Only big corporations can overcome price volatility and survive. France’s Total, Italy’s ENI and Spain’s Repsol started out as government-run companies, became larger and established good cycle and became privatized.

Posco Daewoo’s Myanmar gas field is a notable case of successful overseas resources development. And it took 13 years of consistent endeavors, including the low oil price period in the early 2000s. Elephant Field in Libya was developed by a consortium of five Korean companies, including the Korea Petroleum Development Corp. in 1990, and despite the 1997 foreign currency crisis, the project was consistently promoted, and 1 billion barrel-size oil field was discovered. In the process, Italy’s ENI paid a premium to participate in the project despite a series of failures and discovered a large oil field in the end. Italy made bold moves that a Korean company wouldn’t have considered because of the record of failures and possible criticism.

Restructuring of the resources development public corporation should be reviewed more carefully. It should have a more organized and consistent system based on overseas resources development strategy beyond administration level. We should end the vicious cycle of jumping into a business when energy price is high and withdrawing when price falls and prepare foundation to establish a stable and profitable cycle. Nothing can change with the simple mindset of ignoring problems or getting rid of an organization when met with criticism.

Misconception over the conditional loans should also be clarified. The criticism of favoring large corporations or reckless investment is actually far from truth. Conditional loan is less than 30 percent of the financing, and no business operator would blow up 70 percent for it.
Energy independence is a long journey. Each administration should have a clear and long-term perspective, and the government and the National Assembly need to actively work together for right solutions. What’s worse than a failure is not learning from it.


*The author is a professor of energy resources engineering at Inha University.