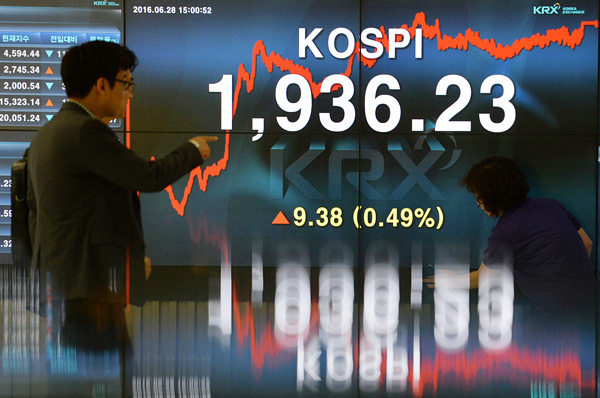 A Korea Exchange employee points to a display showing the Kospi closing at 1,936.23 on Tuesday, 9.38 points higher than a day earlier, despite the turmoil created by British vote on Friday to leave the European Union. The secondary Kosdaq rose 11.18 points to end at 659.3. [NEWSIS]

Battered by a weak first half of the year, restructuring of the shipping and shipbuilding industries and the market turmoil surrounding the so-called Brexit, the Korean government finally gave up hope of 3 percent economic growth this year.

On Tuesday, the government announced it was readjusting its growth forecast for this year from 3.1 percent to 2.8 percent. Although that projection is still higher than those of other public and private analysts both at home and abroad, the government also unveiled a financial stimulus package worth 20 trillion won ($17 billion), including a 10 trillion won-plus supplementary budget, in hopes of keeping the economy from falling to the mid-2 percent growth range.

If the supplementary budget goes through, this will be the first time in Korean history that a supplementary has been used to spur the economy two years in a row.

It would also be the third supplementary budget under the Park Geun-hye administration. The first was in 2013.

“We will submit the budget to the National Assembly as fast as we can so that its effect can be delivered [to the economy] as early as possible,” Yoo Il-ho, finance minister and deputy prime minister for the economy, said at a press conference in central Seoul on Tuesday. “We need a supplementary budget that is focused on stabilizing the public’s livelihood and creating jobs in order to minimize the worsening conditions including corporate restructuring.”

This year’s supplementary budget is supposed to bolster the economy without raising the government’s debt-to-GDP ratio.

The Ministry of Strategy and Finance said other than the 1.2 trillion won that was left over from last year’s budget, the rest of the supplementary budget would be financed by tax collections that exceeded estimates.

“Last year, we had 2.5 trillion won left after our budget spending and 1.3 trillion won was used to pay treasury investors,” said Lee Ho-seung, head of the economic policy bureau at the Finance Ministry. “Now, we have 1.2 trillion won that could be used on the supplementary budget.”

The Park administration has been trying to keep a lid on the national debt to a GDP ratio of around 40 percent.

The supplementary budget proposal, however, is a turnaround from the government’s early view of the downward risks facing the Korean economy.

Until this month, the government insisted that 3 percent growth or higher was achievable and that there was no need for a supplementary budget.

But April-June quarterly growth fell to half a percent, the same as a year earlier when the economy was hit hard by the Middle East respiratory syndrome scare.

“Since the beginning of the year, the domestic economy’s recovery was held back as consumers tightened their spending and external uncertainties including the U.K.’s decision to leave the European Union have grown,” Finance Minister Yoo said. “We have come up with a policy plan for the second half with exceptional determination.

“The government will employ policy measures, including the supplementary budget, aggressively in countering the short-term conditions while preparing against mid-to-long term global changes such as Brexit.”

The markets are already looking to the central bank and wondering if another interest rate cut is imminent.

Earlier this month the Bank of Korea (BOK) slashed 0.25 percentage points off the key policy rate to bring it to its lowest level ever of 1.25 percent. BOK Gov. Lee Ju-yeol, said it was a pre-emptive move to prevent the economy from further retreating in the wake of corporate restructuring.

However, after Britain surprised global markets by voting to leave the EU, there is growing speculation that the central bank could further lower its outlook for economic growth from 2.8 percent, which could lead to an additional interest rate cut.