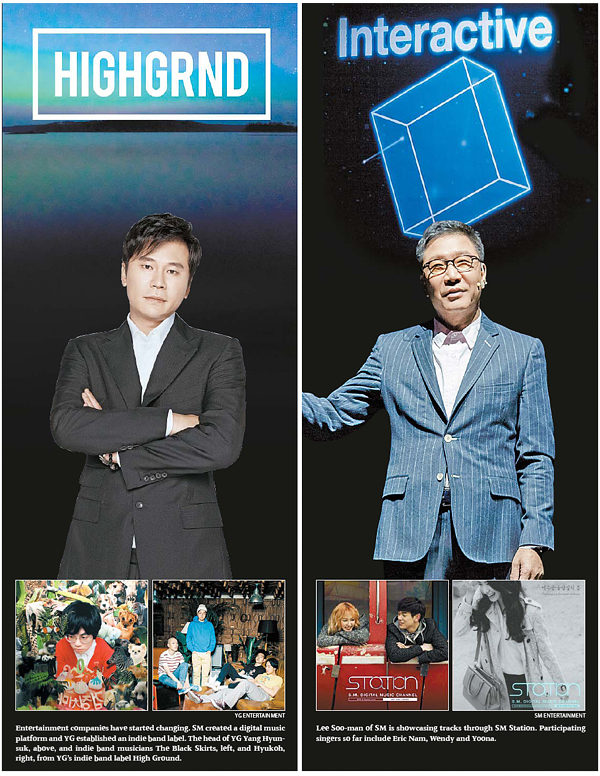 Korean entertainment giants SM and YG Entertainment have started stretching the kinds of music they produce. Focusing on music performed by young idol stars isn’t good enough. Training singers to perform a catchy song is not enough to capture the imagination of today’s demanding public. 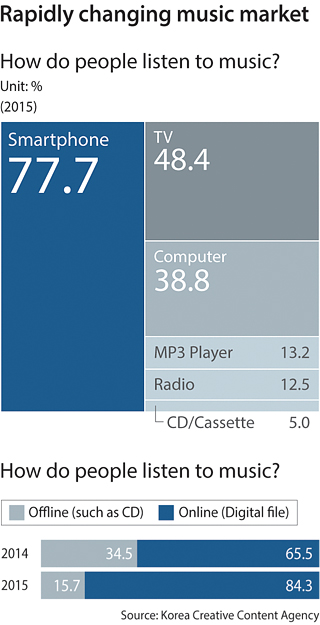 “We will create a new ecosystem of digital songs instead of focusing on the existing industry practices of mini-albums and regular albums,” said Lee Soo-man, CEO of SM. Digital songs will be continuously released, Lee said.

Lee’s idea has created controversy in the music industry. Some even claimed the entertainment giant was trying to monopolize the digital music market.

Since the announcement 18 weeks ago, 18 songs have been released by SM’s Station. The songs have ranged across a spectrum of genres from electronic dance music (EDM) to trot, an old style of music popular in the 1950s, ’60s and ’70s, to heavy metal. Artists are performing different genres and collaborating on songs to create new sounds. The participating celebrities include singer-rapper Yoon Mi-rae and indie duo 10cm.

“Station is not only a radio DJ that selects good music, but also functions as a music director,” said Lee Sung-soo of SM Entertainment.

“Considering the fact that rankings are of utmost importance in the online music market, we created the [SM Station] to spotlight each musician’s talents and also to create diverse music archives.”

Entertainment companies’ efforts to create their own music channels are expected to continue. Jelly Fish Entertainment, which manages singer Sung Si-kyung, started a new digital music channel called Jelly Box. The artists that have contributed to the channel included Singer Park Yun-ha, who generated a buzz with her pure voice in season four of SBS music competition program K-Pop Star.

The entertainment companies are banking on people’s desires for different kinds of music and a mix of genres. The entertainment giants have also realized that content alone is not sufficient and that they need to control their own music platform.

Loen Entertainment announced a plan early this month to establish an indie label, Munwhain, generating buzz in the music world. Munwhain will be a combination of three indie music labels: D Ocean Music, Musicabal and Evans Music. Loen is not the first to establish a label targeting indie bands. SM created the label Baljunso in 2014 and YG established High Ground in 2015. Although SM’s Baljunso is not active, High Ground has scouted popular indie bands, including Hyukoh and The Black Skirts. Entertainment giants’ interests in indie bands grew following the popularity of star indie band Kiha & The Faces in 2007.

“The interaction between underground labels and major entertainment companies is very active in the foreign music scene,” said Choi Won-min, a representative of Munwhain.

However, some people are expressing concerns about the trend.

“The indie music scene is meaningful because indie bands can freely and independently do their music. However, if an entertainment giant intrudes, the indie band music scene may become standardized,” music critic Kim Yoon-ha said.

Entertainment giants these days are employing writers whose role is to come up with an authentic story for a song or a singer.

“JYP succeeded in transforming a disliked idol singer into the image of a dutiful son by making use of a storytelling,” according to a source in the entertainment industry. “In the United States, companies that create a specific image for a star have started appearing.”