A crime of passion

A crime of passion 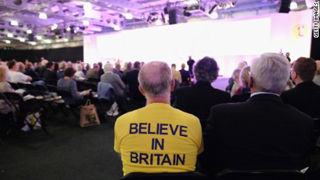 Last month, I spoke with a prominent Chinese scholar at a banquet during the Jeju Peace Forum. We talked about the U.S. presidential election and discussed why Americans rave over Republican candidate Donald Trump.

“People who are angry with their own lives and the world simply want change without thinking about the outcome,” he said. “In the United States, people support Trump. In the United Kingdom, they want Brexit.” He added that the same goes for the Chinese.

Many psychologists analyze “Brexit” as a “crime of passion,” or an illegal act committed out of a sudden fury rather than premeditation. He considered Brexit a short-sighted and irrational decision based on the outrage of the neglected class.

Supporters of Brexit believe their withdrawal from the European Union will bring prosperity. And they like to cite the example of Switzerland. The U.K. Independence Party’s Nigel Farage likes to say Switzerland set its own direction, and the Swiss are happy.

In a 1992 referendum, Switzerland voted against joining the European Communities, the predecessor of the European Union, but is still one of the wealthiest countries. Last year, Switzerland’s per capita national income was $80,675, the second-highest in the world only after Luxembourg, and far higher than the United Kingdom’s $43,771 or the United States’ $55,805. And proponents of Brexit argue that Switzerland’s prosperity is based on its independence from the European Union, as it does not pay the astronomical contribution required and makes its own trade policies.

However, experts disagree. They say that Switzerland’s success owes to the unique work ethic of the Swiss people and not its separation from the European Union.

In fact, on June 5, Switzerland conducted a national referendum on a very unique issue. It was about to introduce a basic income of 2,500 Swiss francs ($2,556) every month to boost consumption. Getting money for free sounds too good to be true, but Swiss voters rejected the proposal, mainly because it would lower the motivation to work. In 2014, a bill to extend the four weeks of paid holiday to six weeks was rejected.

The Brits don’t share this sense of ethics, so leaving the European Union won’t be like it was for Switzerland. It is regrettable that Brexit, a spur-of-the-moment reaction, seems to anyone at all like scoring a goal for the United Kingdom.