‘Deregulation is key to our greater growth’

‘Deregulation is key to our greater growth’ 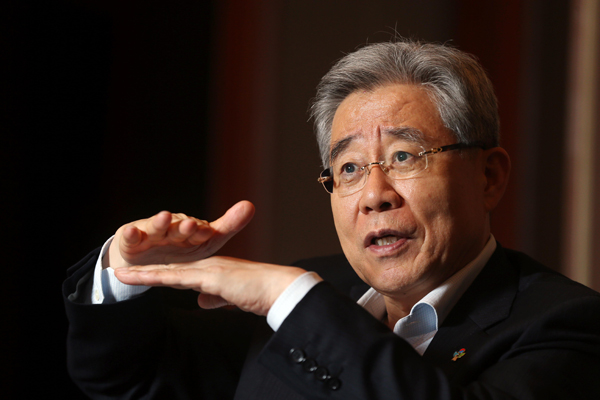 Legalized gambling is subject to taxation, but illegal gambling only feeds criminals, stressed Ham Seung-huie, CEO of Kangwon Land, the only legal gambling facility for locals.

The JoongAng Sunday discussed the legalization of the gambling industry with Ham last week at a conference held to support the eradication of illegal gambling.

The 64-year-old former prosecutor and lawmaker emphasized that illegal gambling should be viewed from the perspective of national security and state wealth leaks.

Q. Why do you think illegal gambling never goes away?

A. For the past 20 years, all kinds of crimes have stemmed from the underground economy. All crimes involved bribes and tax evasion. Illegal gambling wasn’t as big as it is now. But it is getting bigger and bigger. Some research estimates the industry generates as much as 160 trillion won ($136 billion). Because North Korea not only produces drugs but also counterfeit notes, they may be creating illegal gambling sites, too. This will not just be a criminal issue but an issue affecting national security.

What measures are there to reduce illegal gambling practices?

One way is to deregulate the gambling industry and legally open the door to consumers. Industry regulations include the mandatory use of electronic cards as a unified payment tool for all gambling facilities. The National Assembly and the Board of Audit and Inspection of Korea demand lists of gamblers, which exposes their personal identities.

Even if they are kicked out because they refuse to use these e-cards, they are not going to stop gambling. Rather than be exposed, they will hide in the grey areas. As for legally approved industries, it is crucial to keep checking that the profits are being used in the right manner.

For example, we need to look at whether or not the money goes to communities, dead mines, pneumoconiosis patients or not, as it is supposed to. Under the current regulatory system, the balloon effect aggravates the situation by encouraging illegal practices to thrive.

It’s been about 10 years the commission was established, which was expected to supervise the industry, but illegal gambling mushroomed on the internet, making it impossible for the commission to oversee everything.

In the United States, some states have legal gambling facilities. It’s time that the commission and the Ministry of Culture, Sports and Tourism change their perspectives.

Some point out that excessive regulations are the cause of increased overseas gambling. What is your opinion?

It is no problem when foreigners bet hundreds of millions of won while gambling in Korean casinos, but Koreans are not allowed to do the same in Macau or Las Vegas. Even worse, prosecutors investigate people who have gambled abroad even if they have no record of domestic gambling.

Many visitors to Kangwon Land say our all our ski and hotel facilities are outstanding, except for the casino. There are people who look mentally ill at the casino. Visitors gamble in a bloody atmosphere because those people fight for empty seats. To create a healthier mood, we need to set down about 100 more tables, or hire an additional 300 to 400 employees.

This will not only help create new jobs but also ease the current problems in the casino. Now, we are restricted as to how many tables and days an individual is allowed to visit. Lifting such trivial regulations might help curb capital outflows and tax evasion.

Do you think deregulation might prompt gamblers to bring illegal money to Kangwon Land?

Some might. Under the current regulations, massive conversions from cash into chips must be reported to the Financial Intelligence Unit.

To create a healthy gambling environment, allowing certain amounts of cash would help. Such deregulation will not root out illegal gamblers 100 percent, but those who gamble with shady money will still look for illegal facilities at home and abroad.

Bringing only a portion of the illegal money to Kangwon Land will be an important first step toward reducing tax evasion. It is also important to boost horse and bicycle racing for the sake of people’s health. These industries can contribute to raising the government’s fund for unification, too. Wouldn’t it be better than wasting our money in Macau and elsewhere?

What are the regulatory obstacles for Kangwon Land?

Visitors are required to submit identity cards, which is a very strong regulation. And the maximum betting amount is strictly regulated for each game. Since the government approved the facility for gambling, just let people gamble. Keeping track of how much they make from the games encourages illegal activity.

Because of the e-card system, the government can check how much each individual earns or loses. There is no such system in Las Vegas. Such a regulation ignores the nature of gambling. Gamblers will never come to gamble under that system.

Currently, an individual can visit Kangwon Land 15 days per month. Those who visit 15 days in a month are considered possible gambling addicts. The 15-day ban might cause them to look for other places on that 16th day, places that will have to be illegal.

Some families even ask us to lift the ban for their addicted family members, because then at least they will know where their loved ones are. So, we removed the ban for some people. But later, one of them sued us for letting him in after he lost several billion won. After that case, we strictly enforce the ban. Policy makers should be aware of this reality when making policies.

Now the resort business earns about 100 billion won in revenue, while the casino raises about 1.5 trillion won. It is difficult to increase the total profit under this revenue structure and regulatory system. Through deregulation, we can seek greater growth.