Ahn told to step down over kickback scandal

Ahn told to step down over kickback scandal 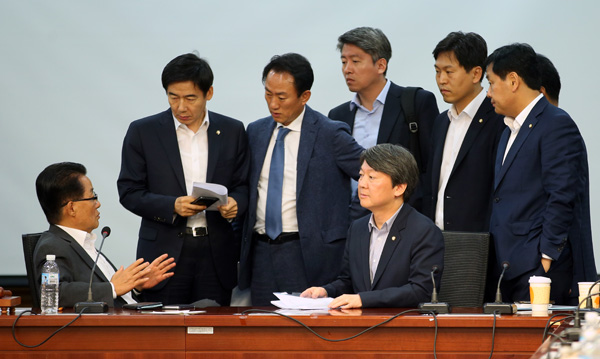 Leaders of the People’s Party discuss the political kickback scandal at the end of a policy workshop on Tuesday in the Members’ Office Building for Assemblymen in the National Assembly in Yeouido, western Seoul. [PARK JONG-KEUN]

The political fallout from a campaign kickback scandal escalated Tuesday as Ahn Cheol-soo, founder of the People’s Party and a potential presidential contender, said he would take responsibility, hinting at his resignation as co-chairman.

The People’s Party, the third-largest group in the 300-member National Assembly with 38 lawmakers, was hit with an embarrassing scandal as two lawmakers and a senior official are being investigated for having allegedly demanded and received kickbacks from advertising agencies in return for hiring them during the April general election campaign.

“As the highest leader of the party, I feel seriously responsible, and I will not avoid responsibility,” Ahn said during a meeting with party lawmakers in the afternoon. “I feel strongly about the responsibility.”

Some lawmakers tried to dissuade him from resigning, although demands were made earlier in the morning that Ahn should step down to take responsibility for the crisis. Rep. Park Jie-won, the party’s floor leader, said after the meeting that the party will hold a Supreme Council meeting and a lawmakers’ assembly again today to further discuss Ahn’s remarks.

Wang Ju-hyeon, former deputy secretary general of the party, was arrested Tuesday morning, and Rep. Park Sun-sook, a former secretary general who oversaw the campaign’s accounts, was questioned by prosecutors for 17 hours since Monday.

Rep. Kim Su-min, the party’s youngest lawmaker and newly-elected proportional representative in the National Assembly, was also questioned by the prosecution earlier this month. She was in charge of public relations for Ahn’s newly emerged centrist political party.

The People’s Party held an emergency leadership meeting at 6 a.m. on Tuesday to discuss the widening scandal. The possibility of expelling Reps. Park and Kim was discussed. The party also gathered its lawmakers after a policy meeting and discussed the issue, but no conclusion was made.

“Lawmakers discussed their fates, and various opinions were expressed,” said Rep. Lee Yong-ho, spokesman for the party. “Some said the two lawmakers’ memberships should be suspended after the prosecution files indictments according to the party’s constitution and regulations. Others said we should make a political decision based on public sentiment.”

Of the 38 lawmakers in the party, 34 attended the meeting. Reps. Park and Kim did not attend as well as Reps. Chung Dong-young and Joo Seong-yong.

“Some said the leadership must take responsibility for its poor handling of the scandal,” Lee said.

Sources also said lawmakers representing Jeolla and Gwangju districts demanded Ahn assume responsibility and step down from the chairmanship. As of now, the party is headed by Ahn and a co-chair, Rep. Chun Jung-bae.

Ahn was in charge of the entire general election campaign in April.

He was also known to have recruited Kim as the party’s proportional representative candidate. Park was also Ahn’s close associate.

“The leadership that headed the campaign and reacted in a lukewarm way to the scandal is responsible,” Rep. Yoo Sung-yop was quoted as saying by sources. “The leadership must show the people that it is taking responsibility.”

Another lawmaker, Hwang Ju-hong, said the party’s decision-making system should be reviewed.

“Rep. Park is Ahn’s close associate, so asking the leadership to assume responsibility is a de facto demand for Ahn’s resignation from the chairman post,” a participant told the JoongAng Ilbo.

Since the National Election Commission revealed the suspicions against Reps. Park, Kim and Wang, the party’s approval rating has plummeted.

The party’s approval rating, however, plunged in a recent survey. According to a Realmeter poll, the party recorded 15.5 percent support during the fourth week of June, the lowest since it started the general election campaign at the end of March.

The fall was particularly serious in its regional strongholds of Gwangju and Jeolla. The party won 47.9 percent of proportional votes in those districts in the April general election, but its support rating dropped to 24.9 percent in the Realmeter survey.

Ahn’s popularity has also declined. His approval rating was 11.5 percent, down by 0.8 percentage points from the previous week, among potential presidential contenders. He still managed to keep third place.