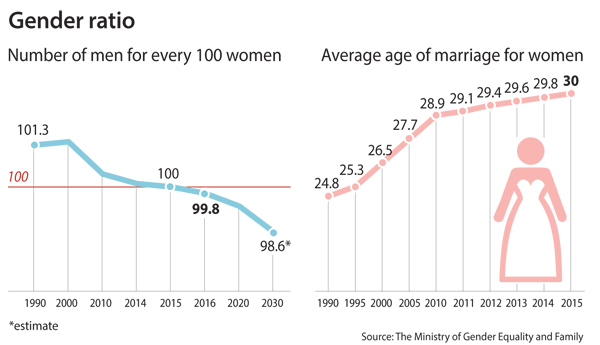 The ratio of Korea’s male population to its female population fell below 100 percent for the first time since censuses began, and will continue falling due to increases in women’s average life expectancy, announced the Ministry of Gender Equality and Family Tuesday.

The number of women in 2016 totaled over 25.421 million, about 40,000 more than the male population, which was over 25.381 million. It’s been two years since the female population exceeded that of men.

“First, fewer people prefer boys over girls nowadays,” a Statistics Korea official said. “Next, the number of women who live longer than men has increased. The male population will further dwindle and the imbalance will worsen.”

Among other figures announced Tuesday, the ministry said women in their 40s accounted for 16.3 percent of the total population, followed by women in their 50s with 16.1 percent and women in 30s with 14.4 percent.

In the 50s age group, men still outnumber women, but over 60, there are more women.