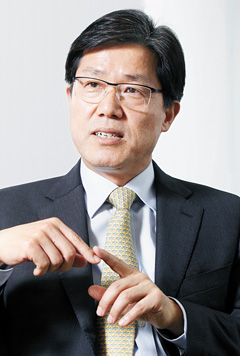 As the double barrels of hard power are increasingly regulated by intergovernmental agencies, nations are expanding their influence through the more pacific work of cultural promotion, and at the forefront of promoting Korean culture is the former diplomat Lee Si-hyung.

When Lee was appointed the new president of the Korea Foundation last month, tasked with promoting the national brand overseas, the 59-year-old began reflecting on his past and what he considers it means to be a leader.

The former diplomat has worked for 35 years in Korea’s Foreign Affairs Ministry, part of which he served as ambassador and permanent representative to the Organization for Economic Cooperation and Development, deputy minister for trade, chief of protocol in the presidential committee for the G20 Seoul Summit, and Korean ambassador to Poland.

Lee recently sat down with the Korea JoongAng Daily to discuss his work. The following is an edited excerpt of the interview.

Q. What are some key projects the KF has planned for the remainder of this year?

A. This year alone, there are around 140 cultural events planned in 80 different countries including exhibitions, performances, movie-screenings and courses in Korean language and culture.

While it’s important to promote Korea outside its borders, it’s also crucial to reach out to the approximately 170,000 foreigners living here. In that sense, the Korean Foundation Gallery in Jung District, central Seoul, will hopefully gather more people from the local community who are interested in learning about Korea and other countries worldwide.

The founding purpose of the KF lies in promoting Korea’s “national brand power” [the ability of a country to attract people] overseas. What’s your definition of brand power?

I think a lot of foreigners still link South Korea with North Korea, which usually conjures a negative image. Back in the old days when I went abroad for work, people would ask me whether I was Japanese. Now, they say “Ni hao” (“Hi” in Chinese). I wish people could ask whether I’m from South Korea, or at least ask whether I’m from one of the three Asian countries.

With brand power, I’m aiming to promote South Korean culture in a way that shows not only do we have a rich traditional culture, but also that our people excel in the global standard of high art, whether in music or literature.

When I was in Poland working as ambassador, not long after I was appointed, the British ambassador to Poland came up to me and asked whether I had watched the recent International Frederick Chopin Piano Competition, held in Warsaw, saying Korean contenders were among the most highly ranked. I personally didn’t know what he was talking about, but still, it really felt good.

What’s the foundation’s outlook for cooperating with foreign embassies?

It’s only been a month since I was appointed, but already many ambassadors have made courtesy calls to me. They’re really ambitious and apparently have a lot in mind. Personally, I find it comfortable to talk with them because we’re on the same page. They’re my partners. The KF has yet to plan any events this year gathering all the embassies in Korea at once, but I’m thinking about meeting every ambassador in person just to hear their thoughts about how we can cooperate.

In a world of hard power, how can KF’s soft power make an influence?

In the big picture, the KF handles the promotion of Korean studies, which includes language and culture. But for someone like me, who worked for a long time in the diplomatic service, I can’t help but think that Korea’s top priority is reaching Korean unification with the help of global diplomacy. In this sense, it’s important to find supporters. All countries are important in this regard and it would be needless to highlight the United States. But with Japan and China, I think ties are weaker than what we have with the United States.

Cultural diplomacy is all about building infrastructure for tough discussions. It’s like laying water pipes. It’s easier to ask a foreign government to be on our side during strained inter-Korean relations when their people know Korean dramas and are fond of them. It’s easier to ask them to help us run the PyeongChang Winter Olympics when they know about Korea’s roots and ethnicity. The KF may not directly be involved in foreign diplomacy, but we have a pivotal supporting role.

You worked for 35 years as a diplomat. What lesson did you learn from that experience and how can you apply it in your current role?

When people go abroad, they tend to be patriots. With diplomats, I think that spirit only intensifies. It’s like introducing yourself to others by saying “Hi, I’m Korea.” Especially when you go somewhere to dine and find that you’re the only Korean or Asian-looking person in the establishment, you feel that all eyes are on you. Throughout my career working overseas, I’ve always felt pressure to teach foreigners about my country and the language that we use back home. I used to tell others I could teach them how to read in Korean in just 30 minutes, and I’ve actually done it several times, too. In other words, I’m quite used to promoting Korean culture to foreigners who don’t know much about the country, and I’m pretty sure this habit of mine will come in handy during my new post.