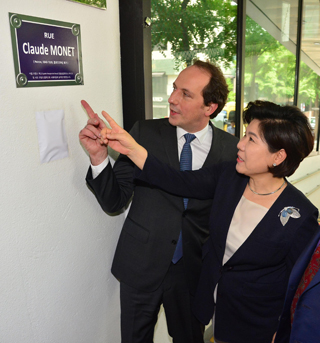 French Ambassador Fabien Penone, left, and Cho Eun-hee, head of the Seocho District Office in southern Seoul, unveil Tuesday a French-style sign post at the French School of Seoul, which in part reads “Claude Monet.” A joint effort between the school and the French Korean Chamber of Commerce and Industry, the latest project highlights 20 influential figures in French culture by printing their names on small boards and exhibiting them throughout Seoraemaeul, a neighborhood in Seocho densely populated by French expats. [NEWSIS]