Three years after the referendum

Three years after the referendum 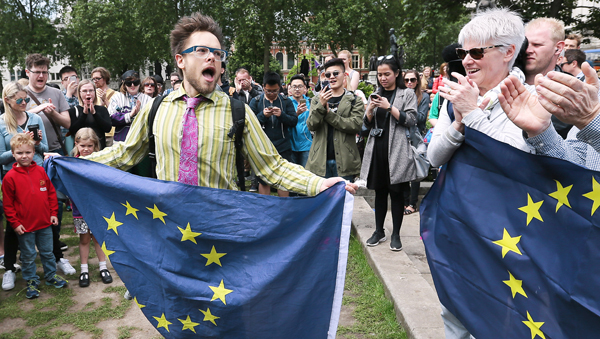 It’s the summer of 2019, three years after British voters stunned the world by voting to leave the European Union. The U.K. has regained its economic and financial footing, as well as its national confidence. A smaller and more unified European Union now functions in a more coherent fashion.

But the road has been bumpy and, as a result, the global economy came close to recession, financial instability and more isolationist policies. Meanwhile, the global standing and influence of both the EU and the U.K. are much reduced.

In the months after the referendum, the U.K. suffered a series of political traumas. All attempts to bypass the referendum’s verdict failed. The two major parties, the Conservatives and Labour, went through messy leadership contests, but still received a major rebuke from voters in the general election that followed. A new “national coalition” somehow managed to come together and negotiated a new Association Agreement with the EU that maintained most free trade of goods and services.

Even though the weaker pound brought a sharp increase in tourists, Britain’s economy took a hit. Weaker business investment and subdued consumption tipped the country into recession, despite an interest rate cut by the Bank of England. The financial sector was damaged the most, shedding workers in response to earnings pressures caused by a lower and flatter yield curve, the deterioration in credit quality and the transfer of company operations and employees out of London, though this flight was less severe than some had predicted.

The EU experienced its own spasms. Emboldened antiestablishment movements had hoped that the victory of the Brexit camp in the referendum would translate into a generalized bounce in popularity with voters. Instead, they received only selective backing as citizens witnessed the buyers’ remorse of their peers across the Channel. As a result, very few countries followed the U.K. out of the EU, and the biggest ones stayed.

With the end of the recurrent skirmishes and arguments with the U.K. over whether the EU should be much more than a free trade zone, Germany and France led a reinvigorated effort toward the “ever closer” union envisaged by the EU’s founders. The regional economic architecture was strengthened, allowing Europe to finally have a realistic hope for a better sustained economic performance.

The referendum sparked three years of intense internal reflection in almost every European nation. Both the U.K. and EU stepped back from some of their traditional global roles. And with the U.S. hesitant to take on additional international responsibilities, the vacuum was filled in a haphazard manner by many other countries, further fragmenting the global system and accelerating its march to what Ian Bremmer has labeled the G-Zero world.

The rest of the global economy and financial markets also were affected. As hard as they tried, they could not fully avoid negative spillover from the instability in Europe. Financial markets went through a period of volatile recalibration, which contributed to the headwinds for global growth. It was only thanks to more enlightened political leadership in the U.S. and systemically important emerging countries — triggered by a long-delayed economic “Sputnik Moment” — that the world economy as a whole was able to avoid recession.

We are still living in messy 2016, however, and this scenario for 2019 is but one of the two major possibilities for the global economy as it gets nearer to the consequential T junction in the world economy’s path that I detailed in “The Only Game in Town.” The other outcome, which is equally probable, would be even worse political dysfunction, resulting in a global recession, intense financial instability, greater isolationist policies and worsening inequality of income, wealth and opportunity.

In a funny sort of way, the U.K. and the EU are leading indicators of how the world economy will fare as the current path comes to an end, and as more improbables and unthinkables become realities. Let’s hope they are up to the challenge.

A lot is at stake.