Stores get creative to lift slump

Stores get creative to lift slump 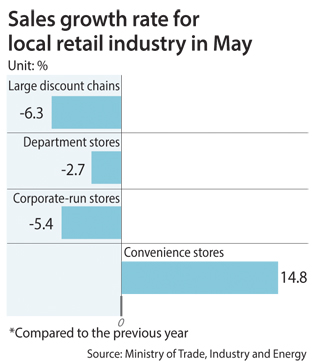 A government report released on Wednesday showed that the retail industry other than convenience stores saw sales drop last month even with the government extending holidays to spur the domestic economy.

With “Brexit” advancing and corporate restructuring under way - further curbing consumer sentiment - retailers are rolling up their sleeves to come up with unique marketing strategies - including giving away chunks of bullion to grab as many as consumers as they can.

Sales at department stores and large discount chains retreated 2.7 percent and 6.3 percent each compared to a year ago, the Ministry of Trade, Industry and Energy said. The government cited fewer holidays this year compared to the same period last year as the reason behind the decline.

Last year, there were 13 national holidays including Buddha’s Birthday and Labor Day. This year, however, the holidays fell on weekends, shortening the holidays to 11.

“People tend to spend more on a single purchase if there are fewer days off,” said Chung Eung-gil, a director at the Trade Ministry. “But this also means the number of visits that they make shrinks,” which results in a decline in sales transactions.

In May, sales of home appliances and sports-related goods fell 6.4 percent and 16.4 percent each at large discount chains. Sales at corporate-run supermarkets dropped 5.4 percent during the same period.

“It appears that there were fewer people purchasing daily supplies such as detergent and wet wipes after the Oxy scandal,” Chun said.

Oxy humidifier sterilizers allegedly killed more than 140 people, the majority of whom were infants.

According to the ministry, each person spent an average of 42,065 won ($36) at large discount stores, 70,867 won at department stores, 14,744 won at corporate-run supermarkets and 4,931 won at convenience stores on average per visit.

On the flip side, convenience store sales continued to grow. Sales rose 14.8 percent year on year, thanks to a rising demand in precooked foods and steady sales of tobacco products.

Sales of precooked and other convenience food rose 45 percent year on year, while those of tobacco and other related items grew 12.8 percent during the same period.

“The number of precooked foods was introduced recently, and it is gaining huge popularity,” said Chung at the Trade Ministry. “Sales of lunch boxes and gimbap [rice rolls] rose significantly as well.”

The government based its data on three large discount stores - Lotte, Hyundai and E-Mart - along with several corporate-run supermarkets including Homeplus and GS Supermarkets. The four convenience stores surveyed were CU, GS25, 7-Eleven and Everyday Retail Co. Hyundai, Lotte and Shinsegae department stores were also included.

Vying for a rebound in consumer spending, Korea’s major department stores are rolling out a series of sales. The scale has gotten larger as retailers are looking to lure in more consumers.

Lotte Department Store has put chunks of gold worth 300 million won on the table as one of the promotional giveaways. The unprecedented selection of gifts derives from a lingering Brexit shock in Korea, in which the unstable stock market and exchange rate is leading consumers to rally for gold, the risk-free asset.

“We are trying to revitalize consumer sentiment by rolling out such special giveaway promotional events.”

A total of 21 shoppers will be selected as the beneficiaries of gold packages worth 300 million won in total. The top prize winner will receive gold worth 100 million won.

The event launched today at the department store’s 33 branches nationwide. Customers who visit the branches between today and July 24 can apply for the event, regardless of purchases.

The retail giant also started its regular summer season sale, discounting seasonal items such as sunglasses and swimsuits by as much as 70 percent.

The retailer said it will distribute shopping coupons worth 100 million won to one customer. The event will end July 31.

“These types of giveaway promotions have a bigger effect than just rolling out discount events,” a Hyundai Department Store spokesperson said.

“Out of hope that they might actually win the prize, more shoppers tend to come to the shopping malls.”

Its 15 branches nationwide also started sales today, which will last until July 17. In addition to gift packages that will be distributed to customers at Lotte and Hyundai, other major department stores in Korea are gearing up for the summer season.

Shinsegae Department Store said it will start its summer sale today at 11 of its branches. The main branch in Myeong-dong, central Seoul, will hold this year’s first off-season sales on casual and outdoor brands. Discounts will be as high as 70 percent.

“These regular summer sales will be a vital turning point for us to estimate how the consumer sentiment will turn out in the latter half of this year,” a Shinsegae spokesperson said.