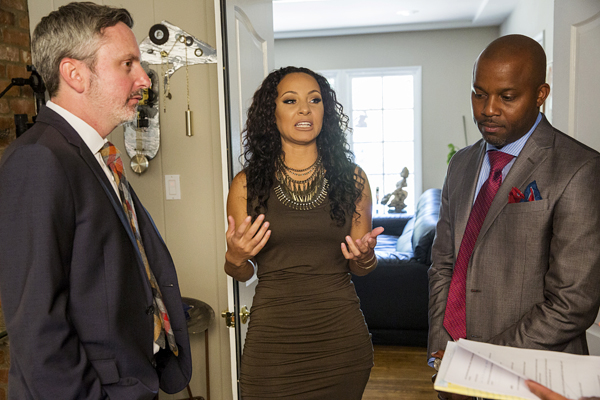 LOS ANGELES - Toi-Lin Kelly has known Marion “Suge” Knight for 11 years, and says the former rap music mogul is nothing like the fearsome reputation associated with him from his heyday at the helm of the influential gangster rap label Death Row Records.

Knight, jailed on murder and attempted murder charges after he ran over two men with his pickup truck last year, is a caring father and devoted family man, who at age 51 remains a “momma’s boy,” says Kelly, who’s engaged to Knight and has a 6-year-old son with him.

“People forget that he’s human, and he has people who love him and has a family and a lot of people who root for him,” she told The Associated Press in an exclusive interview alongside Knight’s new legal team, J. Tooson and Jeremy Lessem. Knight is not permitted to speak publicly.

The session, held recently at the attorneys’ suburban offices, offered a preview of their defense of the former mogul, including a detailed account of the time leading up to a violent confrontation that ended when Knight ran over the two men, killing one, outside a Compton burger stand in January 2015.

It is the latest allegation of violence against Knight, a two-time convicted felon and inextricably linked to the violence of the 1990s rap scene.

Knight faces up to life in prison if convicted in the murder case, but Tooson and Lessem say he was fleeing an ambush and didn’t realize until later that he had run over and killed Terry Carter, a Compton businessman who was attempting to resolve a dispute between Knight and the makers of “Straight Outta Compton.” The attorneys say Knight was expecting to have a meeting with Carter about receiving payment for the use of his likeness in last year’s highly successful biopic of the pioneering gangster rap group N.W.A.

Kelly says Knight had no idea there would be trouble, and planned to join her and their son at an arcade restaurant to play video games after meeting with Carter. She says Knight was extremely close to his son, taking him to school each day and helping him play with a new scooter before heading to Compton that fateful day.

Upon arrival, Knight was confronted by several armed men at Tam’s Burgers, where he was supposed to meet Carter, the lawyers say. He was attacked by Cle “Bone” Sloan, a technical adviser on the N.W.A film who survived being run over by Knight’s pickup. Knight heard some of the men shouting orders about how they were going to kill him, Tooson says.

Fresh in Knight’s mind was an August 2014 nightclub shooting that left him severely injured with seven bullet wounds, the attorneys say.

After running over Carter and Sloan, a key prosecution witness who’s admitted he was hitting Knight through the window of his pickup, Knight left the scene and later turned himself in to authorities.

“I think people have this perception of him that he’s this monster that wakes up every morning looking for trouble,” she said. “That’s exactly who he isn’t. I think his nickname, Sugar Bear ... describes him perfectly.”