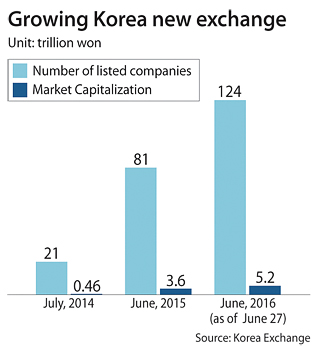 Korea’s financial authorities launched its third bourse Korea New Exchange (Konex) three years ago to accommodate smaller start-ups that weren’t big enough to be listed on the main bourse Kospi and the tech-centered Kosdaq. Ahead of its third anniversary that falls on Friday, the smallest trading board scored a market capitalization of 5 trillion won ($4.3 billion) on June 13.

“The average daily trading volume was about 60,000 shares that are worth 400 million won,” said Noh Tae-hyun, a head of Konex market division at Korea Exchange, the country’s stock operator.

The number of listed companies also enjoyed a steep rise in recent years, growing from 21 in 2014 to 124 this year, as of this week.

Most of the companies run bio and tech-related businesses.

Still, it is hard for individual investors to have access to the market since Konex limits retail investors’ participation.

No public offering fund has been introduced on the market. Only eight public equity funds came over the past three years.

That made a way for venture capitalists and institutional investors to become primary stakeholders.

“To make a public fund, there should be active trading on the market,” said a source in the asset management industry.

“But on Konex, the market is not that bustling and most of the investment is made in long-term as it is for venture capital,” the source said.

The Park Geun-hye administration led the initiative in line with its “Creative Economy” theme that emphasizes the role of innovative tech entrepreneurs and start-ups.

To scale the business, start-ups in earlier stages were encouraged to be listed on the trading board to raise funds needed to expand their businesses.

The Konex is open to small ventures in the early stages of development with at least 1 billion won of capital.

Similar businesses that have been operating for more than 10 years with at least 3 billion won in assets qualify for the Kosdaq.

“The overall trading volume increased,” another asset management source said, “But still there is a perception that small companies have high risks. So individual investors are still reluctant to make a bet.”

To boost its size, asset management companies and brokerages called for the split of shares held by the largest shareholders or more frequent issues of new shares.

Others said that Konex companies should also be required to submit their financial reports as their peers do on Kospi and Kosdaq to enhance transparency and foster access to a wider base of investors.