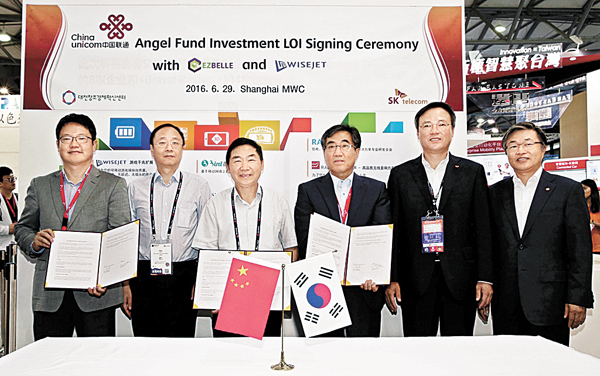 The two companies are WiseJet, developer of a solution for transmitting massive video files between devices through a wireless, zero-delay connection, and Tricubics, provider of a high-definition 3-D model production platform for smartphones.

They are part of a start-up incubation program jointly supported by SK Telecom and the Daejeon Center for Creative Economy and Innovation.

China Unicom, with 250 million subscribers, runs a so-called angel fund that invests in promising start-ups at home and abroad. It announced the investments Wednesday after evaluating the two Korean start-ups technological edge and potential for success when their products are commercialized.

The two companies are scheduled to launch services in China in the second half of the year and enter other markets afterward.

The deal between two leading telecom operators in Korea and China on the sidelines of the Asian edition of the annual Mobile World Congress comes after they agreed last November in Shanghai to jointly foster start-ups in both countries.

SK Telecom has recommended Korean start-ups deemed to have the potential to perform well in China. The Mobile World Congress Shanghai kicked off on Wednesday.

“We will continue getting actively involved in incubating start-ups with upbeat potential to create more examples of a large company and fledgling small companies growing together,” said Kim Jeong-soo, head of the Creative Economy Innovation team at SK Telecom.

SK Telecom threw a Demo Day on the same day to showcase products and services from 14 other start-ups it has been supporting at its booth at the Shanghai event.