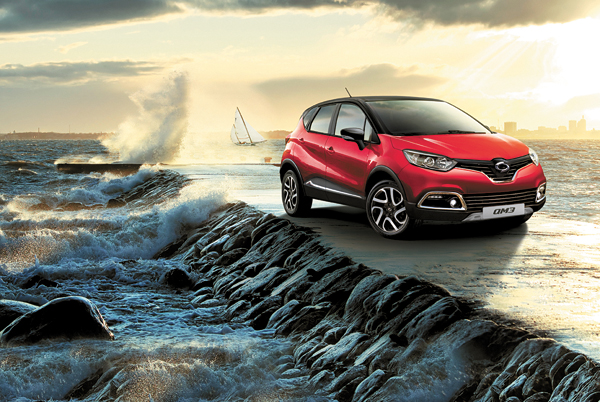 Renault Samsung Motors has recently released the QM3 RE Signature, an upgraded version of the QM3 RE, to target young consumers. The model comes in colors such as “Sonic Red” and “Chocolat Brown.” [RENAULT SAMSUNG MOTORS]

According to statistics from the Korea Automobile Manufacturers Association, the number of SUVs sold in May reached its highest ever, at 42,458 units.

Experts say the QM3 has successfully targeted consumers in their 20s and 30s with its sophisticated design and fuel efficiency of 17.7 kilometers per liter (41.6 miles per gallon).

Renault Samsung is continuing its efforts to target young consumers with the release of its QM3 RE Signature. The model is an upgraded version of the QM3 RE, which accounted for approximately 50 percent of total sales of the QM3 line in May.

The QM3 RE Signature comes in youthful colors like “Sonic Red” and “Chocolat Brown.

The T2C is a tablet PC connected to the vehicle, offering features like T map navigation, music streaming via MelOn, rear-view monitoring and weather reports. The T2C is detachable for additional convenience.

Besides its fuel efficiency, the QM3 also boasts competitive pricing. Both the top-of-the-line diesel Tivoli and the QM3 cost 24.95 million won ($21,560), but only the QM3 is equipped with high-quality genuine leather, a navigation system and a rear-view camera.

Considering its fuel efficiency and price, the QM3 has the highest price competitiveness among all small-size SUVs.