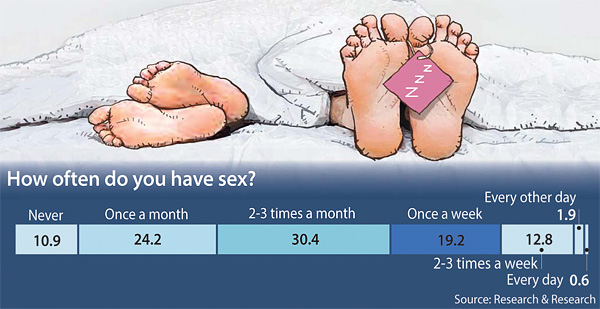 Mr. Kim, a 59-year-old office worker in Busan, says he and his wife have a lifestyle they don’t talk about much, especially to outsiders.

They have a sexless marriage.

The Kims haven’t had sex in two decades. Kim says he lives a completely sexless life.

“At first, I know my wife struggled with the idea,” Kim said. “But as her body changed in her 40s, her desire for physical relations naturally subsided. We haven’t had much of an issue with it since then.”

Kim said he doesn’t have any medical problem and never considered consulting a doctor to get some help.

The couple are anything but unusual. More than three out of 10 couples in Korea have sexless relationships, according to research by the private polling firm Research & Research commissioned by the Kang Dong Woo Institute for Sexual and Couples’ Health.

In a poll of 1,090 male and female adults nationwide, 784 married and 306 unmarried, 38.2 percent of respondents said they have sex once a month or less. An adult that has sex that infrequently is considered “sexless.”

For married respondents, the sexless percentage was slightly lower at 35.1 percent. Married people who have sex twice or three times a month comprised 30.4 percent of the respondents, followed by 19.2 percent who have sex once a week.

For married people in their 50s, 43.9 percent said they have no sexual relationship with their partners.

And yet nearly all respondents - 93.9 percent - said intimate physical interaction was a vital aspect of their lives and relationships with others.

Mr. Yoon, a 39-year-old office worker, is also in the sexless category, which he finds kind of natural.

“Since my wife gave birth a year ago, I haven’t had sex,” said Yoon, who lives in Seoul and has been married for three and a half years. “I would say the biggest reason is her pregnancy as she needed time to recover from giving birth.”

Yoon said such a way of life is common among his friends, especially after five years of marriage, and some even within two years, he said.

“My mother-in-law lives with us to take care of the baby, and that also hampers our ability to have sexual contact,” Yoon said.

The percentage of sexless couples in Korea lags behind Japan’s 44.6 percent, according to Dr. Kang Dong-woo, who heads the Institute for Sex and Couples’ Health. But it is the second highest percentage in the world, he said.

The percentage of married couples in the U.S. who have not had sex in a year was 6 percent, according to a survey by the Austin Institute for the Study of Family and Culture.

“The average percentage of sexless couples worldwide is about 20 percent,” Dr. Kang said.

The survey asked people whether they were satisfied with their sex lives, and 22.8 percent of the respondents, both married and unmarried, said they were not.Of those who said they were not, 24.5 percent blamed physical fatigue, while 17.3 percent complained their partners were not caring enough, 13.9 percent cited a lack of variety and 10.5 percent attributed it to stress.

“With the wide use of smartphones and social media, a culture of individualism has swept young people,” Dr. Kang said, “leading in some part to reduced interest in sexual relations.”