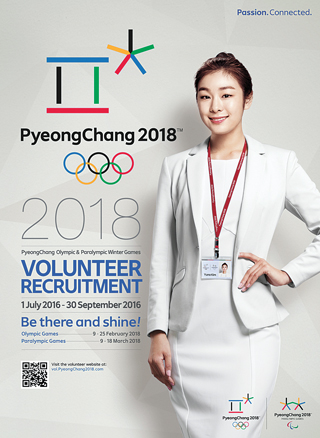 The PyeongChang Olympics organizing committee announced Thursday that it has launched volunteer recruitment for the PyeongChang Winter Games.

Lee Hee-beom, president of the PyeongChang Organizing Committee for the 2018 Olympic & Paralympic Winter Games (Pocog), and many guests including Minister of the Interior Hong Yun-sik attended the launch event in central Seoul.

“PyeongChang Winter Games is a global festival with more than 45,000 people from around the world attending the event,” said Lee during opening remarks. “The 2018 PyeongChang Olympics is followed by Tokyo Summer Games in 2022 and the 2024 Beijing Winter Games. The entire world will channel their attention to Northeast Asia during the next few years.

“Volunteers are the face of the Olympics,” Lee said. “The first people the visitors around the world meet when they first come to the Olympics will be the volunteers. How the volunteers show themselves in front of the world will decide the success of the event. If the seeds of volunteerism were first planted in the 1988 Seoul Olympics and the 2002 Korea-Japan World Cup, then those seeds will finally bear fruit in PyeongChang in 2018. I ask that volunteers work with us to allow guests to watch the games and feel at home.”

There are 588 days until the opening of the Winter Games, which is slated to kick off February 9, 2018. The Korean government also promised its support and are asking Korean citizens to help in Pocog’s preparations.

“After the Rio Olympics in August, the eyes of the entire world will be shifted to PyeongChang,” said Hong, the Interior minister. “The time has finally come for not only the Pocog, but also the government of Korea and the Korean people to become one to prepare for the successful Olympics. I believe this event today to launch a volunteer campaign will be a milestone towards our success in 2018.

“I believe this effort to recruit volunteers and provide them with training will be a catalyst for the unification of the Korean people as one as the Games approach,” Hong added.

Officials and representatives of universities in Korea, including Yonsei University, Korea University and Gangwon University, also attended the event to sign a Memorandum of Understanding with the organizing committee. As the Winter Games take place while college students are on break, the Pocog hopes for active participation from young talent around the country. “I hope the students find pride in working for our country and [Pocog] will make sure their contributions are remembered in our nation’s history,” said Lee, head of the Pocog. “I hope we can take this opportunity to implement a new culture of volunteerism in this country.”

Pocog will recruit up to 22,400 volunteers over the next three months, 16,000 for the Olympics and 6,400 for the Paralympics. Candidates 18 years or older can apply individually or as a group of more than 50. Individual applicants may apply through Pocog’s website, Vol.PyeongChang2018.com, which will be live starting today until September 30. Groups can submit application forms via email at volunteer@pyeongchang2018.com.