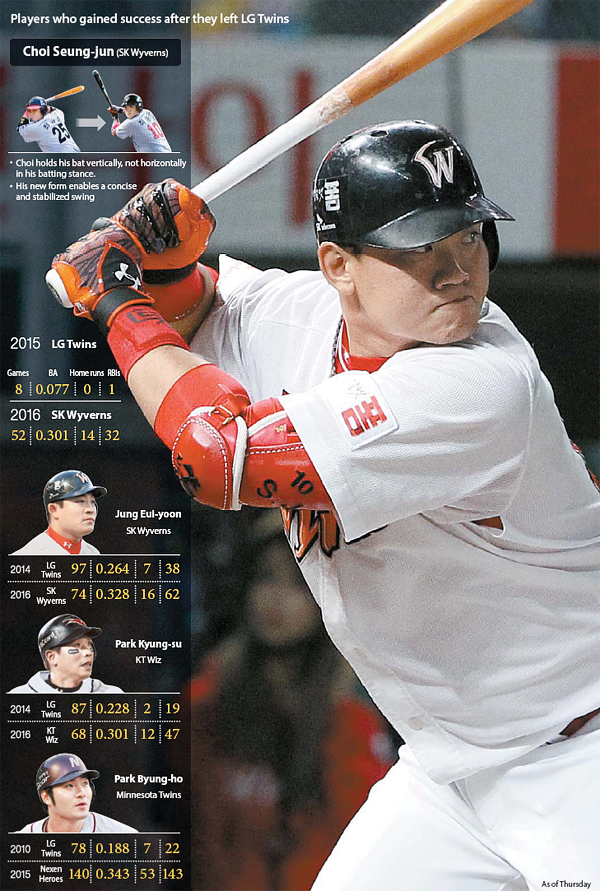 Why do sluggers such as Park Byung-ho of Minnesota Twins and Jung Eui-yoon of SK Wyverns come alive only after they have left the LG Twins?

Players such as Park, Jung, Park Kyung-su of KT Wiz and Choi Seung-jun of the Wyverns share a commonality in that they’ve shown off their true value as a slugger once they moved to other clubs from the Twins. Some fans call this “exodus effect,” a rather sardonic reference that describes the phenomenon where a player who struggled at bat with the Twins becomes a key slugger for his new team.

For Choi, the secret behind his success after his departure from the Twins is in his new batting form.

During a game on June 28 against the KT Wiz, Choi was the key to the Wyverns’ win as he smacked three consecutive home runs in three at-bats.

Just like that, since he joined the Wyverns from the Twins, Choi has been having the season of his life. The 28-year-old infielder had only two homers while playing for the Twins from 2006 until last year. No one would have guessed that he would crank out 14 home runs in the early stages of this season.

At this current pace, some insiders predict that Choi might achieve a personal high in home runs per season by grabbing as many as 40 dingers this year. The Wyverns, who once fell to seventh in rankings, have steadily risen to fourth with Choi on fire at the plate.

Choi once was considered a favorite to become a huge success. Having played alongside Major Leaguer Ryu Hyun-jin of Los Angeles Dodgers, Choi was the 51st pick during the KBO draft in 2006 when he joined the Twins. He was the top slugger in 2013 and 2014 for the second-tier KBO league, the Futures League.

For some reason, he never excelled in the top league and the Twins ran out of patience. After signing free agent Chung Sang-ho, the Seoul-based team decided to exclude Choi from the 20-man roster last year.

The Wyverns, who had success plucking Jung from the Twins last year, scouted Choi without any hesitation. Jung’s case was no different than Choi. Struggling at the plate with the Twins early last year, landing no home runs in 32 games, Jung immediately gained momentum when he joined the Wyverns in July and belted 14 home runs in 59 games while recording a .341 BA and 44 RBIs. The Wyverns knew Choi had the potential to be “the second Jung.” And, their gambling paid off.

The first thing the Wyverns did after Choi joined the club was to put Choi’s batting form under renovation.

Jung Kyung-bae, the Wyverns hitting coach, forced Choi to hold his bat vertically rather than horizontally, which ultimately made his swing concise and stable.

It took some time for Choi to adjust to his new form. The exhibition games in March were nightmares for Choi, who recorded 25 strikeouts, more than half of his total at-bats during the spring league.

“I thought it would take it at least six months to fix his batting form,” said the Wyverns hitting coach. “I told him it is OK to strike out but as Choi got agitated, I noticed he went back to his old form. So I yelled at him from time to time. But after hitting the walkoff grand slam on June 18 against Josh Lindblom of Lotte Giants, I noticed he regained his self-confidence. His form isn’t perfect yet but I think he is doing well so far.

“Even foreign batters feel pressured and find it difficult to smack a long hit when in Jamsil Stadium,” the coach said. “I am sure he felt the same way. I think Choi came to feel less burdened and more at ease after he joined our team.”

Jung’s statement is not unwarranted. It is true that Jamsil Stadium, the Twins’ home ballpark, is a difficult venue to hit the ball over the fence. The stadium itself is even bigger than some Major League stadiums. Essentially, it is a difficult place for sluggers such as Choi to show off their slugging ability, which adds more burden to the Twins in its home run drought. The Twins currently have only 55 team home runs, the lowest of the 10 KBO clubs.