‘Hamilton’ one of few works on Revolutionary era

‘Hamilton’ one of few works on Revolutionary era 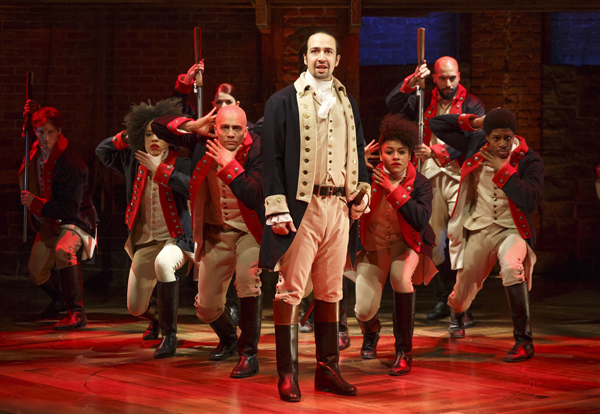 In this photo released by The Public Theater, Lin-Manuel Miranda, foreground, performs with members of the cast of the musical “Hamilton” in New York. [AP/NEWSIS]

NEW YORK - Winner of the Pulitzer Prize and 11 Tony Awards, “Hamilton” is a cultural phenomenon that stands as the most celebrated work of art ever inspired by the American Revolution.

The competition is remarkably thin.

While the Civil War, World War II and the Vietnam War have inspired acclaimed movies, plays, poems and novels, from Stephen Crane’s “The Red Badge of Courage” to Steven Spielberg’s “Saving Private Ryan,” notable works about the American Revolution are rare outside of history books.

At 240 years since the country’s birth, the tiny pantheon includes the musical “1776,” the paintings of Gilbert Stuart and Emanuel Leutze, the poems “Paul Revere’s Ride” by Henry Wadsworth Longfellow and “Concord Hymn” by Ralph Waldo Emerson, and the HBO adaptation of David McCullough’s “John Adams” that starred Paul Giamatti and Laura Linney.

“The founding era exists on the other side of a cultural and even sartorial divide,” says historian Ron Chernow, whose biography of Alexander Hamilton is the basis for Lin-Manuel Miranda’s hip-hop musical. “We know the founders only through paintings and engravings, which seems to distance them from us.”

“The neglect has been quite shameful,” Chernow added, “at least until Lin-Manuel Miranda came along.”

The deficit of Revolutionary War art began even as the battle for independence was being fought. The U.S. had no literary scene of note at the time of its founding and no distinctively American literary culture until well into the 19th century. While other wars produced memorable firsthand accounts, whether Norman Mailer’s World War II novel, “The Naked and the Dead,” or Iraq War veteran Phil Klay’s prize-winning story collection “Redeployment,” the vast majority of works about the American Revolution are based on archival material.

Filmmakers have almost entirely bypassed the Revolution. There have been no major productions about the Declaration of Independence, the drafting of the Constitution, George Washington’s crossing of the Delaware River or the dire winter in Valley Forge. No actor has given a performance as Washington, Thomas Jefferson or Benjamin Franklin as indelible as Daniel Day-Lewis’ starring role in Spielberg’s “Lincoln.”

“The Founding Fathers are sacred, near-mythical creatures; one portrays them at one’s peril. Moses might be easier,” says historian Stacy Schiff, whose book on Franklin, “A Great Improvisation: Franklin, France, and the Birth of America,” came out in 2005.

The ever-popular Franklin and the traitorous Benedict Arnold have been the subjects of TV miniseries, but not big-screen biographies. Walter Isaacson’s “Benjamin Franklin,” published in 2003, is the basis for an upcoming documentary by Ken Burns.

“I prefer Burns to a feature film,” Isaacson told The Associated Press, saying he thought a documentary would be more effective. “... That said, if someone wants to make a feature film on the delightful Ben Franklin, I am happy to help, and I’m sure he would merrily wink at us through his newfangled bifocals.”

The few movies set in the Revolutionary era include the 1995 Merchant Ivory production “Jefferson in Paris,” a drama starring Nick Nolte that had mixed reviews and flopped at the box office, and “The Patriot,” directed by Roland Emmerich and featuring Mel Gibson as an American who leads a militia after his home and family are brutalized by the British. The film received Oscar nominations in 2001 for music, sound and cinematography, but it was widely criticized for inaccuracies, with historian David Hackett Fisher writing that “The Patriot” is to history “as Godzilla was to biology.”

Hollywood has so resisted stories of early American history that Emmerich acknowledges that if his current movie, the sci-fi spectacular “Independence Day: Resurgence,” was actually set in 1776, it’s unlikely the film would have been made. Emmerich says that even while making “The Patriot,” he was aware that other parts of American history were more popular.

“I was surprised that even the crew members seemed to have no idea what that time period was about. They thought we were going to make a Civil War movie,” he says.

Historical novels are far more common, if not more acclaimed. Gore Vidal’s scandalous “Burr,” about Aaron Burr, who killed Hamilton in a duel, and Howard Fast’s lively “Citizen Tom Paine” were best-sellers in their time, but they don’t match the stature of Walt Whitman’s Civil War poems or Ernest Hemingway’s World War I novel “A Farewell to Arms.” Vidal biographer Jay Parini, who believes “Burr” will continue to engage readers, finds it “sad that the best novels of the American Revolution were written so long ago.” He praised a 1940 novel by Kenneth Roberts, “Oliver Wiswell,” and Fast’s “Citizen Tom Paine,” which came out in 1943.

“These two books have a lingering popularity among avid readers, but they have mostly fallen out of sight,” Parini said.

Several novelists have taken on the story of Thomas Jefferson and the slave with whom he conceived children, Sally Hemings. Parini enjoyed a recent novel, “Thomas Jefferson Dreams of Sally Hemings,” by Stephen O’Connor. In 1979, Barbara Chase-Riboud’s best-selling “Sally Hemings” infuriated historians and Jefferson partisans with the then-unproven contention that he had physical relations with the slave. Sally Cabot Gunning’s “Monticello: A Daughter and Her Father,” coming out in September, centers on Jefferson and daughter Martha Jefferson Randolph, who despises slavery but knows the family home depends on it.

“I just wanted to jump down into her world and get inside her head,” says Gunning, whose previous books include “Benjamin Franklin’s Bastard,” a 2014 novel about the son Franklin had out of wedlock.

Hamilton will be the subject of a novel due in August, Elizabeth Cobbs’ “The Hamilton Affair,” the story of his marriage to Elizabeth Schuyler. Cobbs, whose previous books include the Civil War novel “Broken Promises” and a series of textbooks on American history, says she began the Hamilton novel a few years ago and was anxious to create an engaging story about the Revolutionary era, “not ever having read one I liked.”

“They all seemed so stilted, or perhaps just dated. Take a peek at Irving Stone’s clunker on Abigail and John Adams, ‘Those Who Love.’ I challenge you to stay awake past page 20,” she told the AP, adding that she found Hamilton a far more positive figure than she had first believed.

“And then I met Eliza, who touched my heart. I felt they had both gotten a bum rap, long before I knew ... [Hamilton] might be turned into a rapper.” AP