Unless you’re a die-hard, skip ‘Big Bang Made’

Unless you’re a die-hard, skip ‘Big Bang Made’ 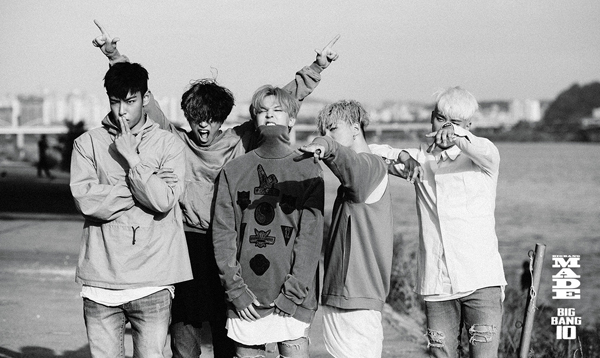 A still from the documentary film “Big Bang Made,” featuring the five members of the K-pop boy group. The film is a feast for die-hard Big Bang fans but will leave the average moviegoer hungry for something with luster and depth. [YG ENTERTAINMENT]


A well-made music documentary can turn a skeptic into a full-blown fan, showing the raw emotions and punishing work behind the glossy images and polished singles.

Don’t expect that from “Big Bang Made,” the new documentary about the hugely popular K-pop boy group Big Bang.

The film will be a feast for die-hard fans of the group, which celebrates its 10th anniversary this year, but the rest of us will be left hungry for something of actual substance.

As it stands, “Big Bang Made” is an unbalanced, disorganized slog that focuses too much on trivial details and too little on the lives of the people behind the music.

Screen X technology is used to project the film on two side walls as well as the main screen. [CJ CGV]

Over an all-too-long 122 minutes, the documentary covers nearly a year of Big Bang’s world tour, which visited 32 cities in 13 countries.

“Big Bang Made” quickly falls into a predictable rhythm. First, it shows a preparatory session in which the five members of the group discuss their upcoming tour or work on choreography. Then, it cuts to an actual clip of Big Bang performing on stage.

Rinse, repeat — for over two hours.

The film does give the impression that the members of Big Bang care about the tiniest of details, such as the exact spot each one will stand on stage.

Sometimes, they even get confrontational with staff about a perceived lack of preparation for the tour.

But it’s hard for the audience to relate in these moments because the film does such a poor job of explaining the entire situation, and so Big Bang comes off looking guilty of overreacting.

The information given to the audience is shallow, too. “Big Bang Made” opens with the reveal of why Seungri kissed fellow member G-Dragon on the cheek during one of the concerts, but this would only interest die-hard fans, not the average moviegoer.

The documentary is particularly disappointing because there should be so much more there. Big Bang is one of the most successful K-pop groups in history, and it’s remarkable that they’ve managed to remain relevant for a decade in which dozens of other artists have come and go.

The film seems to want to suggest that this is because they’ve made the transition from talented kids to full-blown artists, but it fails to provide the background information needed to show how the members made that journey.

It’s almost as though YG Entertainment, the group’s talent agency, thought that the group was so successful it didn’t need to deign to show how it got there.

And if that’s the case, this isn’t just a bad film — it’s also condescending to the average moviegoer.

Still, devoted fans of the group will appreciate the behind-the-scenes footage that “Big Bang Made” offers.

The documentary shows the members relaxing and teasing one another, and its best moments show that at the end of the day, they’re still just Korean guys in their late 20s. One of the best bits includes the group talking about needing to hide their tattoos from their conservative parents who feel as though they’re getting too many — something that more than a few in the audience will likely relate to.

But even those moments can’t save “Big Bang Made” from being a fans-only affair, leaving those of us eager to learn more about the group and its music wanting.

The film opened Thursday in theaters nationwide. It is rated 12 and over.

A 2D version of the film is 114 minutes long, while a Screen X version runs 122 minutes long.

Screen X is a technology co-developed by CJ CGV, the country’s largest theater chain, and the Korea Advanced Institute of Science and Technology.

It involves the projection of images onto the two side walls of a theater as well as the main screen.