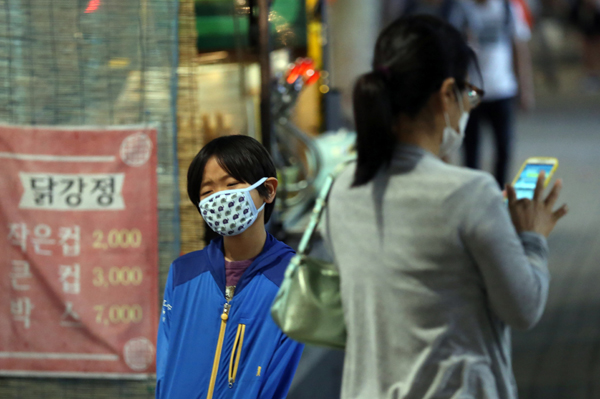 At 6 p.m. and 10 p.m. every day, the roads around Daechi-dong in Gangnam District, southern Seoul, are full of heavy traffic as sessions at private after-school academies end all at once. It takes as long as 20 minutes to get out of the 1-kilometer (0.6-mile) section of Eunma Junction.

In the past, the worst spot for traffic jams was the Nambu Expressway between Dogok Station and Daechi Station. But as major schools moved one block northward, this changed.

Congestion is mainly caused by cars parked in the road as mothers wait to pick up their children. Right when the students get out, two lanes on both sides are packed with cars.

It is only natural that this bottleneck becomes more serious as shuttle buses operated by the schools also run at this time. After 20 to 30 minutes of congestion, cars then leave the area all at once.

Another traffic jam, albeit a bit less heavy, occurs around midnight. Parents come to pick up their children who study at reading rooms after they finish classes at 10 p.m.

Daechi-dong is not the only area with congestion at night. Other neighborhoods where after-school cram schools are concentrated suffer from a sudden surge of cars as parents drop off and pick up their children every day. Locals know to avoid driving at this hour, or if they must, to use other routes. If they forget, they will be stuck in traffic.

After picking up their children, these mothers give them snacks and drop them off at other academies or reading rooms.

In the meantime, they wait at coffee shops in the area, exchanging educational information. Lately, 24-hour cafes enjoy plenty of business as a result of this. In fact, it is hard to find empty seats at night.

And on weekends, you can easily spot fathers waiting for their children by the parked cars.

While children attend after-school academies from elementary school on, they hardly seem happy about it. They look as heavily burdened as their backpacks. Everyone knows this is not normal. But everyone also thinks, “At least I will make sure my child is on track.”

And no one raises so much as a question. Last year, Korea’s private education market grew to 17.8 trillion won ($15.1 billion).

The academies compete to attract customers. They are concentrated in certain areas, and if things go wrong, they could very well go out of business. So schools constantly resort to unethical measures.

Some schools crossed the line when mock test questions for the College Scholastic Ability Test were leaked. They informed the students of the test questions.

The Ministry of Education pledged to seek criminal punishment and additional compensation from those who leaked and distributed the test. We need to see if the ministry is once again threatening but not actually pursuing the case, or if it will finally prove that breaking the law has consequences.