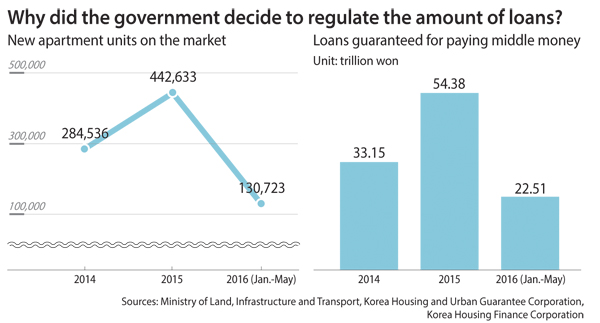 Seoul’s Gangnam District, home to Korea’s highest housing prices, is getting nervous as the government considers ways to regulate how much Koreans can borrow for their middle money.

Middle money is the money that new home buyers pay during construction. This money is separate from the initial contract fees.

Most of the apartment units in the district cost more than 900 million won ($780,000), but the Korea Housing and Urban Guarantee Corporation will not be able to guarantee loans for all home buyers.

The government recently announced plans to set the upper limit at 900 million won.

Home buyers could renege on their contracts, and construction firms will have a tougher time if new home buyers won’t be able to receive loans to pay middle money. And many worry the new plan will significantly hurt reconstruction projects.

“Apartments currently under reconstruction in the Gangnam area won’t be able to sell at expensive prices from now on,” said Song In-ho, a researcher at Korea Development Institute. “This will eventually pull down the housing prices for reconstructed apartment units.”

Some, on the other hand, argue that the government’s decision won’t have much of an impact on the local housing industry. They say that many of those who are looking to buy new houses in Gangnam District are financially stable enough to buy homes without loans.

And not many apartment units are on the market. According to Real Estate Info, a housing information provider, only about 1,000 units, or 10 percent of the total units that will be available after the reconstruction in the Gangnam region, will be sold to the public.

Some 130 units per apartment complex will be available to the public and the rest will go to previous residents.

In fact, Korea’s real estate market soared for the past decades, and some believe the government’s decision might stabilize the local market. Apartments in popular areas or those built by well-known construction firms will still likely be in demand.

It’s also possible that the demand for new homes will be concentrated on certain areas or apartment buildings once the new regulation goes into effect.

Many experts believe that the government’s recent decision will hurt the real estate markets in rural areas where there already are plenty of apartments available and the demand for housing in these regions isn’t growing as fast.

“There were many speculators and investors who looked for making profits by investing in apartments in rural areas. The market might collapse significantly in rural areas.”