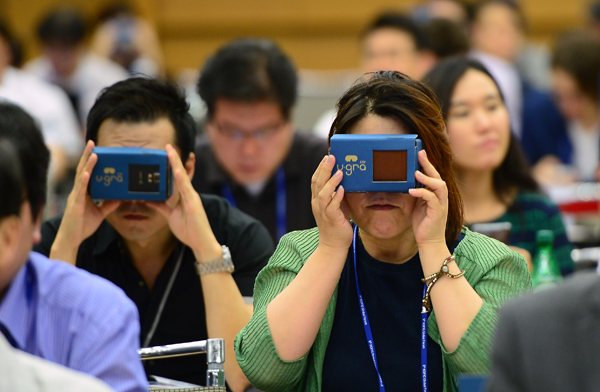 Participants watch a VR film at the Korean Film Council Global Forum held on Tuesday at the Korea Chamber of Commerce and Industry in central Seoul. [NEWSIS]

Virtual reality, or VR for short, will be the next big thing in the global film market and will eventually change the way motion pictures tell their stories.

This is according to film industry insiders who gathered at the fifth Korean Film Council Global Forum on Tuesday and Wednesday at the Korea Chamber of Commerce and Industry in central Seoul.

During the two-day event, five sessions were held, with the first session centering on the theme of VR cinema.

Yelena Rachisky, the creative producer at Oculus Story Studio, and Claire Spencer Cook, the development producer at Nexus, were two of the panel experts invited to participate in the session.

Oculus Story Studio is a Facebook-owned studio that specializes in producing VR films.

Rachisky said there were only four VR films at the Sundance Film Festival three years ago in the new frontier section, in which people are able to explore all kinds of new technologies from projection mapping to VR films.

But, she said, “Since then, over 2 million hours of video have been watched in VR, and soon, this will be over 3 million.”

She added that 80 percent of people who use VR gear do so in order to watch videos rather than play games.

Among some of the works she listed as good examples of VR work is the documentary film “Clouds over Sidra.”

There are many types of VR, including 180-degree and 360-degree films, but Rachisky said Oculus Story Studio put priority on three-dimensional live rendered positional tracking, which offers the most immersive experience because it enables people to walk around and interact with objects around them.

Cook at Nexus, a U.K.-based production company, shared some clips of a VR animated short entitled “Rain or Shine” and described how traditional storytelling could become interactive when combined with VR.

In the story, viewers who wear a VR headset can follow Ella, a little girl and the protagonist of the film, but as they do this, other stories unfold if and when viewers look at some of the other supporting characters, such as a postman or a bird.

“There are 10 sub-plots and they all fit back into the main plot,” said Cook. The main story also waits for the viewer until he or she comes back to Ella.”

Wee Won-sik, the director at the Gyeonggi-based IT solution company Weeslee and Company, said “VR is in its early stages, where people are still investing, and I think the industry will mature by around 2020. Looking at the past 15 years, technologies have developed so fast that the next generation won’t be able to resist VR.”

The state-run Korean Film Council, which supports and fosters the domestic film industry, holds the global forum annually in order to find breakthroughs in the saturated film market, which is highly dependent on ticket sales.