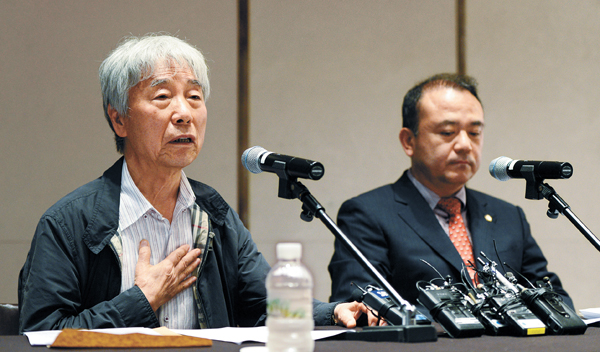 Artist Lee Ufan holds a press conference at the Westin Chosun Hotel in central Seoul on Thursday, claiming all 13 suspected forgeries of his works confiscated by police to be authentic after two rounds of examination. [NEWSIS]

In a surprising turn of events, renowned modern artist Lee Ufan declared all 13 suspected forgeries of his works to be authentic, contrary to the conclusion of a yearlong investigation by police experts.

Furthermore, during a press conference held at the Westin Chosun Hotel in central Seoul on Thursday, the 80-year-old artist said that police officials tried to appeal to him to concede that at least a few of the pieces were forgeries.

“On June 27, police asked me to acknowledge that the four pieces that Mr. Hyeon admitted to having forged were indeed fakes in an attempt to reach a compromise,” Lee said to reporters, “but I refused.”

A 66-year-old art dealer surnamed Hyeon is suspected to be chiefly responsible for circulating copies of Lee’s works. Hyeon testified during the first hearing at the Seoul Central District Court on Tuesday, confessing to having forged and distributed Lee Ufan’s pieces, saying he would “accept the punishment.” 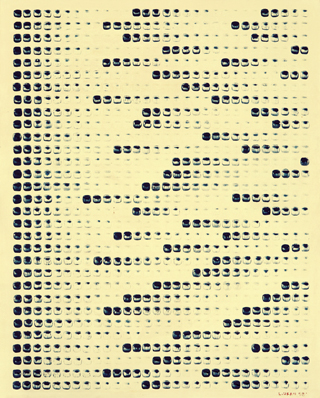 Lee’s verdict that the 13 pieces confiscated by the Seoul Metropolitan Police Agency are real comes after two examinations over Monday and Wednesday and contradicts the conclusion drawn by police that the paintings are forgeries after appraisals were made by the National Forensic Service and civilian art experts.

On Wednesday, Lee appeared before Seoul police for the second time this week, carrying two catalogues of his art and a magnifying glass. About four hours later, he emerged from the station declaring that the works were without a doubt authentic.

“I concluded that there is not anything strange with a single piece,” said Lee. “The use of breath, rhythm and color were all my techniques.”

He then asserted, “An artist can recognize his own piece at a glance.”

Police in turn said they will respect Lee’s opinion but that they will continue their investigation. But with Lee’s declaration that police tried to persuade him to say some of the confiscated pieces are indeed fake, further controversy may now begin to simmer over which side is telling the truth.

Seoul police began a full investigation into the suspected distribution of fake Lee Ufan paintings last summer after being tipped off that forgeries of the artist’s works had been circulated at galleries in 2012 and 2013.

Police were also after Hyeon, who ran a gallery and was suspected of ordering the forgeries and selling copies of pieces from Lee’s popular and pricey “From Point” and “From Line” series. Hyeon initially fled to Japan and was arrested in April with the cooperation of Japanese police. He was repatriated to Korea in May.

On June 2, police determined that the 13 confiscated works, including “From Point No. 780217,” were forgeries after examination by the National Forensic Service and civilian experts.

Lee had initially expressed anger at being caught up in the middle of the controversy and because police conducted their investigation without consulting him.

On Sunday, Lee returned to Seoul from Paris, and on Monday appeared at the police station to examine the confiscated artworks to determine if they are indeed forgeries, before asking for two extra days to draw a final verdict.

Though forgery suspicions began to surface in 2012, Lee, who has a history of disagreeing with experts about the authenticity of alleged forgeries of his work, adamantly denied them at first.

Lee was at the forefront of the minimalist Dansaekhwa movement, as well as Japan’s Mono-ha movement, which focused on using raw, unaltered materials.

He has continued to garner international attention and has held exhibitions at the Guggenheim Museum in New York in 2011 and at the Palace of Versailles in 2014.

Lee departed for Shanghai on Thursday and is scheduled to return to Korea on Saturday.