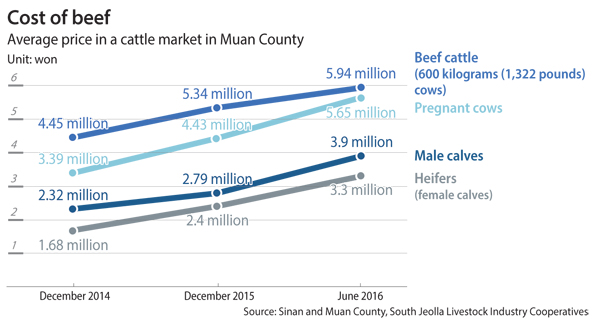 The mood was tense on Sunday morning in the livestock auction market in Illo-eup, Muan County, South Jeolla, when participants discovered the minimum bidding price on calves was 3.5 million won ($2,970), some 1 million won higher than a year ago.

“Okay,” said the auctioneer into his microphone. “We’ll start the auction on calves and up to 15 people will be able to make purchases.”

Some 15 minutes after the start of the auction, the farmers helplessly pushed the button on the bidding machine.

“I would have no problem if I could sell the cows at a higher price,” said Kim Gyu-sik, 67. “But you don’t know what will happen with the price of cows. I can’t help but be scared when buying calves.”

Those who made successful bids were later loading the calves on their trucks with flat, disenchanted expressions.

“A few years ago I could buy at least two calves after selling a cow,” said Choi Jung-gyu, 60, who had just purchased calves in the auction. “Now I can only buy one calf with that money.”

“I can’t believe the price of a 6-month-old calf is 4.5 million won,” said Park Tae-hwan, 55, at the auction. “I don’t know what to do anymore since it will cost me some 8 million won to raise a cow because it costs at least about 3.5 million won to feed the cow for two years.”

Lee Dong-woo, 68, who also purchased a calf in the auction, said, “I feel helpless because I have no choice but to buy a calf since I sold off a cow.”

Many point to the recent reduction in the supply of calves as the cause of price increase. The number of calves in the market steadily decreased as small-scale livestock farms closed due to worries that the price of Korean beef might fall. Also, after signing the free trade agreement with the United States, the government enacted policies enticing farms to shut down.

The existing beef cattle farms have therefore made efforts to improve the quality of their cows in order to further differentiate them from imported beef. There are five grades given to Korean beef, starting with the highest grade, 1++, down to 3, the lowest grade. Their efforts have paid off, too. The percentage of beef graded above level 1 rose from 58.1 percent in 2012 to 66.6 percent in April 2016, while grade 3 beef fell from 14.1 percent in 2012 to 8.2 percent in April 2016, according to the National Agricultural Cooperatives Federation, or Nonghyup.

But despite their efforts to raise the price of Korean beef, they still struggle from deficits due to the increase in the price of calves.

Some farmers have cautioned that if the government does not regulate the price of the calves within the next two to three years, the nation’s entire livestock industry could collapse.

“If we don’t get the proportionate prices for beef cattle then we’re all doomed,” said Park Woo-young, 64, who runs a beef cattle farm in Yeongam County, South Jeolla. “To reduce Korea’s dependence on foreign beef, the nation has to devise a measure to increase the supply of calves to meet demand.”

“Livestock farms that received government subsidies to shut down are now barred from raising calves for five years,” said Mun Man-sik, the head of the livestock industry cooperatives in Muan County. “To increase the calf supply, the government could look into reducing that to three years.”

Gye Je-cheol, director of the livestock department from the Gangwon Provincial Government, advised, “The government should subsidize large-scale cattle farms calves in addition to dairy cattle. The best method to solve the problem would be for the government to establish a ‘cow base’ and supply calves steadily.”