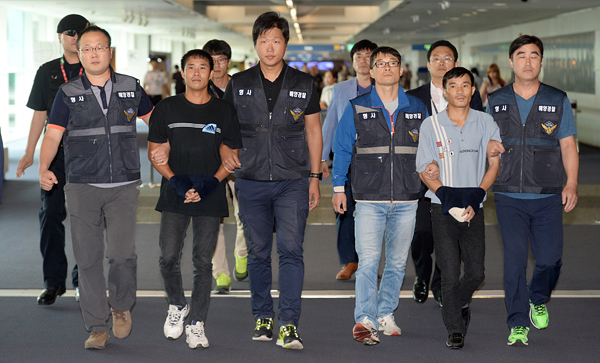 The two Vietnamese crewmen who allegedly stabbed a Korean captain and chief engineer to death aboard a deep-sea fishing vessel in the Indian Ocean were brought back to Korea on Thursday to face trial.

Korean Coast Guard officials escorted the suspects, both 32 years old, by flight on Tuesday from Seychelles and, following a layover in Mumbai, arrived at the Incheon International Airport a little after 2 p.m., according to the Ministry of Affairs.

This is the first case in which the coast guard had to take into custody foreign suspects and escort them personally back to Korea.

Both men were said to be intoxicated when they attacked the captain and engineer off the coast of Somalia.

They were suppressed by other sailors and locked up aboard the vessel until they reached a port in Victoria, the capital of Seychelles, four days later. There were no further incidents.

There were initially 18 crewmen aboard the ship including seven Vietnamese, eight Indonesians and three Koreans.

The remaining Korean crewmen took helm of the ship after the death of the captain, remaining in close contact with the vessel’s operator.

Immediately after the incident, nine coast guard officials were also dispatched to Seychelles to begin investigation into the murder.

The Foreign Ministry added the transfer of the suspects to Korea was made possible through many steps of negotiations with relevant governments and airline officials, taking into consideration that the murder of Koreans happened on international waters and there is no direct flight between Seychelles and Incheon.

Furthermore, the safety of other passengers aboard the same flight would have to be secured.

The ministry added that it cooperated with the Korean embassies in Ethiopia and India, as well as with the Mumbai consulate, in order to bring the suspects to Korea.

“We plan to continue to negotiate with Seychellois authorities through diplomatic channels to provide necessary support for judicial proceedings in Korea,” the Foreign Ministry said.

Busan Coast Guard officials will take custody of the two suspects and continue the investigation by further questioning the witnesses, overseeing the autopsy of the victims and reviewing any available evidence.