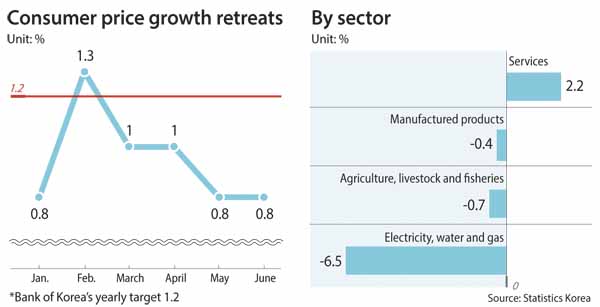 Consumer prices have increased by less than 1 percent for two months in a row, the first time in eight months that Korean prices were so tame.

A fall in crude oil prices was the main cause, according to the government’s statistical agency. The figures are a setback for efforts to stimulate the economy, which has not yet shaken off fears of deflation.

The figure is far below the Bank of Korea’s target of 1.2 percent, and is a signal that efforts to spur inflation to a level that will permit healthy economic transactions have so far not borne fruit.

Inflation in petroleum products fell 9.6 percent year on year as international crude prices remained low. That contributed to bringing down the overall inflation by 0.41 percentage points.

The price of gasoline and diesel dropped 8.7 percent and 10.3 percent each in June compared to a year ago. This helped overall prices for electricity, water and gas drop by 6.5 percent, and it contributed to bringing down overall inflation by 0.3 percentage points.

“The inflation rate only rose 0.8 percent last month, but it would have been near the mid-1 percent level if oil prices were higher,” a Statistics Korea official said. He pointed out that the energy sector dragged down the rate by some 0.7 percentage points.

In fact, the average price of Dubai crude fell to as low as $20 a barrel earlier this year. It has been going up since to near the $40 level but is still about $10 cheaper than it was last year at this time.

Subway fare prices surged 15.2 percent, and bus fees were 9.6 percent higher than a year ago.

Prices for educational services rose 1.6 percent. Tuition costs at private educational institutes for high school students jumped 2.9 percent in June compared to a year ago, but the price of school meals dropped 2.1 percent during the same period.

By region, consumer prices increased the most in Seoul, by 1.2 percent, followed by Busan and Incheon at 0.8 percent. The inflation rate was the lowest in Gumi, South Gyeongsang, where it was recorded at negative 0.2 percent.

Bank of Korea Gov. Lee Ju-yeol will hold a press briefing next week to explain the details of the bank’s plans to bring the inflation rate up to its target.