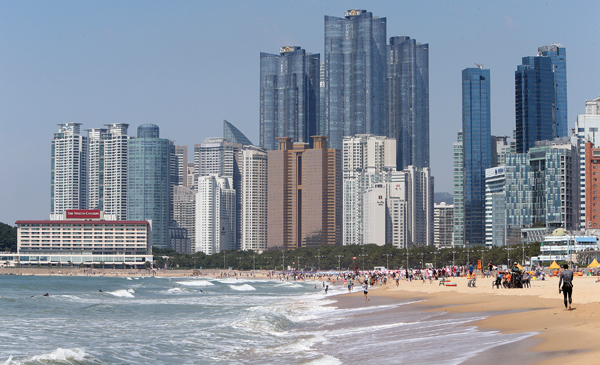 Vistas of luxury apartment blocks and supercars are not reserved for Seoul’s Gangnam alone. The rich here are choosing to flock into Marine City in Busan’s Haeundae District.

Marine City hugs Haeundae Beach, the most popular resort in the nation. The district’s rise started in the early 2000s, when it was designated for new town development. It began to replace Busan’s downtown Gwangbok-dong and Jungang-dong in Jung District, as well as the old money neighborhoods in Nam District and Dongnae District.

The area attracted large construction projects and luxury brand shops vying for consumers who are more than willing to spend their money. Duty free stores, yacht wharves and upscale dining establishments line the streets. The Shinsegae Centum City Department Store, the largest shopping complex in the world, is also in Haeundae District.

Marine City’s development started earlier, in the late 1980s, when the Daewoo Group reclaimed 923,000 square meters (9.93 million square feet) of land from the waters of Suyeong Bay. A 100-story skyscraper was initially planned, but the entire zone lay fallow for nearly two decades after the conglomerate went bankrupt in 1999. Development was revived in the 2000s, and high-rise construction followed after 2010. Now Marine City is a special district for international conventions, premium cinemas and the marine leisure industry. 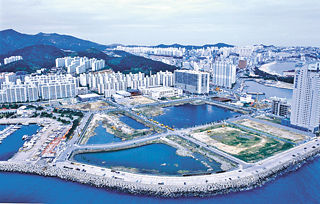 Marine City in 2003, prior to development. [HAEUNDAE DISTRICT OFFICE]

The area also features some of the world’s tallest residential buildings, which are the most expensive in Busan. They include Doosan We’ve the Zenith Towers. A 204-square-meter exclusive flat in one of these towers was sold for 2.4 billion won ($2.06 million) recently. Apartments in LCT the Sharp, a seaside skyscraper complex, are priced at 27.5 million won per 3.3 square meters. The penthouse is 60 million won per 3.3 square meters.

About 28,800 residents of 13,300 households live in the 11 mixed-use tower blocks of Marine City. Among these, six apartment towers have more than 40 floors. Parking lots for these buildings resemble mass supercar exhibition centers. Mercedes Benz, BMW and Audi cars are parked side by side. Bentleys and Porsches are not a rare sight. A 50-year-old Benz owner said, “Bentley is the latest trend.”

Many residents have high-income jobs like doctors or lawyers. Successful entrepreneurs and foreign businessmen also live in the neighborhood. Private banking centers of 18 banks and 10 investment companies maintain a presence to reach these star customers.

Only 82 recipients of basic livelihood pensions live in the area, the majority of them minors who are living with their relatives, in contrast to the neighboring U1-dong, where 1,037 are supported with government subsidies.

Signs of wealth are reflected in every facet of residents’ lifestyles. In a playground in Marine City last Friday morning, a mother was pushing a stroller priced more than 2 million won. A nearby coffee shop sells sandwiches for 7,000 won to 10,000 won. A gym charges 700,000 won for 10 50-minute sessions, similar to fees at gyms in Seoul’s affluent Gangnam District that cost around 800,000-won for the same package. The laundries all put up signboards reading “Specializing in luxury brands.”

A laundry shop owner said, “Recently I handled a piece of knitwear for a woman. She had bought that single garment for 8 million won. The babywear they drop here is all foreign brands.”