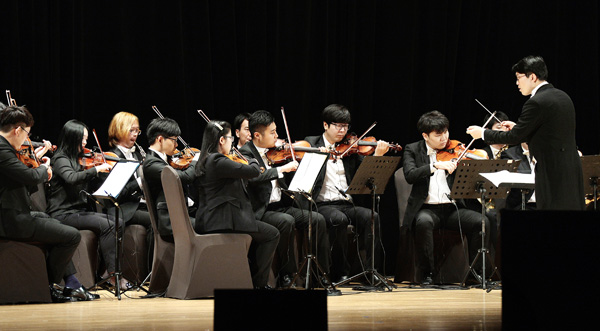 The Heart to Heart Foundation Orchestra, composed of people with developmental disabilities, plays at the opening ceremony of the Joint World Conference on Social Work, Education and Social Development 2016 in the COEX Auditorium on Monday. [OH SANG-MIN]

In addition to their sonic beauty, orchestras have a mesmerizing visual appeal by which their instrumental ensembles are played with all the synchronized elegance of a corps de ballet, but watching 14 people with developmental disorders perform this feat elevates the experience to something altogether breathtaking.

The Joint World Conference on Social Work, Education and Social Development 2016 was held from Monday to Thursday in COEX, southern Seoul. On the first day of the conference, 14 musicians dressed in black and white formal attire were busily handling their instruments inside the waiting room of the COEX Auditorium.

“Tune your instruments,” said instructor Kim Nam-young as he walked through the group.

The musicians, together with their instructor, are part of a chamber orchestra organized by the Heart to Heart Foundation, a Christian charity organization. All 14 members have developmental disabilities.

“Ladies and gentlemen,” announced the host of the conference’s opening ceremony, “we’ve prepared quite a special performance for you this evening.”

The orchestra members approached the stage and seated themselves before an audience of about 1,000 people.

As soon as the conductor lifted his baton, the orchestra snapped into place and the audience became still. Then as the music began, a wave of wonder and awe swept over the crowd.

For some 20 minutes, the orchestra played the first movement of Mozart’s Symphony No. 25, Haydn’s Trumpet Concerto and Brahms’ Hungarian Dances.

As soon as they finished the last note of the final piece, the audience nearly jumped from their seats to deliver a standing ovation that lasted minutes.

“I’ve never seen people with disabilities playing instruments in an orchestra,” said a 37-year-old Indian woman. “It was surprising and perfect.”

The audience would perhaps have been even more amazed had they known what went into making the performance possible.

“This is the result of our members practicing each piece about 1,000 times,” said Han Seung-yeop, who directs the orchestra team.

Kim Geun-do, the conductor of the orchestra, has been with the members through all their ups and downs over the last three years.

“At first, I didn’t know what to do with the students,” he said. “Some were incapable of controlling their emotions. They screamed in the middle of practices. They went out to find their mothers.”

But the skills of the members had gradually escalated over time.

“They made remarkable improvements,” he said. “I felt proud watching them put so much effort into practicing. I treat them like any other people and have very high expectations for them.”

The members of the orchestra all aspire to become professional musicians. One of the trumpet players, Lee Han-kyeol, 21, has a grade-three developmental disorder. He studies at the Korea National University of Arts.

Lee has been playing the trumpet since 2007. In a recent contest held in Busan, he breezed through the preliminary round, which is known to be difficult for even seasoned musicians.

Kim Dong-gyun, 23, who plays the flute in the orchestra, has grade-two autism and dreams of becoming the next James Galway or Emmanuel Pahud, two world-class flautists.

Kim graduated from the Korea National University of Arts this year and is now enrolled in graduate school.

“Ever since he started playing the flute, his condition has improved,” his mother, Sung Eun-hee, said. “I’m so happy for him.”