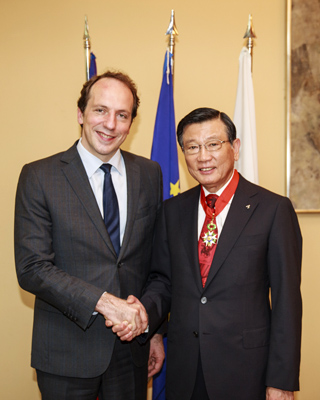 French Ambassador to Korea Fabien Penone presented Park with the medal on Monday at his Seoul residence. Penone said he thought highly of Park’s efforts as a businessman and cultural representative.

Park said it was “an honor to receive such a medal during this year, the 130th anniversary of the establishment of diplomatic ties between Korea and France.”

He added, “I’m honored to be acknowledged for my activities by France, which is known to be a country of great art. I will further try my best to promote interaction between Korea and France.”

Park was acknowledged for creating a direct route between Incheon International Airport and Paris Charles de Gaulle Airport in 2008 after pushing for it for 20 years. Asiana Airlines’ decision to use aircraft made by the French manufacturer Airbus further helped him earn the honor.

Park’s commitment in trying to vitalize Korea’s classical music and art scene was also noted. Through the Kumho Asiana Cultural Foundation, a leading company-driven cultural foundation in Korea, Park has been fostering musical prodigies and artists by covering education fees and providing instruments and places to practice.

Fine arts prodigies have received funds from the foundation to help them hold exhibitions of their own.

Park was appointed as the foundation CEO in 2005 and has been actively participating in programs and events, helping the Kumho Asiana Cultural Foundation stand out among many other cultural programs operated by conglomerates. Last year, his devotion won him the chairmanship of the Korea Mecenat Association.