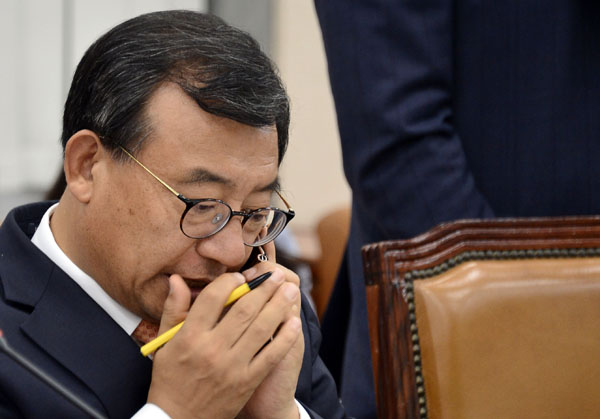 Rep. Lee Jung-hyun talks on the phone during a meeting of the Education, Culture, Sports and Tourism Committee at the National Assembly in Yeouido, western Seoul, on Friday. [NEWSIS]

A political heavyweight close to President Park Geun-hye was criticized for pressuring the country’s biggest broadcaster to dilute critical reports on the administration after the tragic sinking of the Sewol ferry in 2014.

The National Union of Media Workers held a press conference Thursday and released transcripts of conversations between Rep. Lee Jung-hyun and Kim Si-gon, former newsroom chief of the government-controlled Korean Broadcasting System (KBS). In the transcripts, Lee, then senior presidential secretary for public affairs at the Park Blue House, protested KBS’s reports on the sinking of the Sewol.

The ferry capsized and sank on April 16, 2014, while carrying 476 people, mostly high school students on a school trip to Jeju Island. More than 300 died, and many survivors were rescued by fishing boats and commercial vessels, not the Coast Guard.

The Park administration came under heavy criticism for its slow and ineffective response to the tragedy. As a result, then-Prime Minister Chung Hong-won took responsibility and resigned, and the Coast Guard was dismantled. The catastrophe also shed new light on the cozy relationship between the ferry industry and governmental regulators.

“Is this appropriate to beat up on the Coast Guard and the government right now?” Lee was quoted as asking Kim in the transcript of their phone conversation on April 21, 2014, five days after the sinking.

He was taking issue with a report critical of the Coast Guard.

“I understand what you are saying,” Kim responded.

Stressing that the captain and crew were responsible for the tragedy, Lee said, “The report seemed to have an intention.”

Kim defended the report by saying, “We criticized because their responsibility is also grave.” He then added: “Mr. Lee. Let’s be honest. Who has helped you as much as we have?”

The union said Lee’s remarks were in violation of the second clause of Article 4 of the Broadcasting Act because he was exerting direct and indirect pressure on the broadcaster.

“No one shall regulate or interfere with the broadcast programming unless as prescribed by this Act or other Acts,” the clause reads.

Pointing out that Lee was the senior presidential secretary for public affairs, the union said the administration attempted to control media reports at the time.

In another transcript released Thursday, Lee telephoned Kim again on April 30, 2014, after the KBS reported that the Coast Guard stopped Navy divers’ rescue operation to allow a private company to work first.

“I beg you to save me this one time,” Lee was quoted as telling Kim. “[The Navy] was mobilized and completed their job. They were taking turns.”

After Kim said he would talk to the newsroom, Lee said, “Of all the broadcasters, [she] saw KBS today. Please help me.” The media workers’ union said Lee appeared to be referring to President Park in the comment.

“This is our reality that when a senior presidential secretary for public affairs makes an order, a public broadcaster is forced to consider,” said union head Kim Whan-kyun.

On May 27, a special panel investigating the Sewol’s sinking said it would ask prosecutors to investigate Lee and Kim on charges of violating the Broadcasting Act. As the controversy snowballed, Lee said Thursday, “Because we knew each other from the past, I went a little too far when I talked to him. I feel sorry for Kim.”

“It is inappropriate for the presidential office to comment,” he said Friday morning.

The Blue House faced fierce attacks from the main opposition Minjoo Party at the House Steering Committee of the National Assembly on Friday.

The committee oversees the affairs of the presidential office, and the president’s chief of staff, Lee Won-jong, answered questions from lawmakers during Friday’s session.

Rep. Kang Byung-won of the Minjoo Party asked Lee if President Park had ordered Lee Jung-hyun to complain about the KBS reports, and the presidential chief of staff denied it.

“It is unreasonable to speculate about such an issue,” Lee Won-jong said. “Then-public affairs senior secretary Lee probably sought the cooperation [of KBS] in order to perform his duty faithfully.”

He also said a prosecution probe will reveal the truth.

Earlier in the morning, the Minjoo Party leadership demanded the president’s explanation.

“Ordering what should be reported and what should be removed and habitually issuing threats cannot be tolerated,” said Rep. Woo Sang-ho, the floor leader, demanding President Park explain the suspected interference in person.

“Let’s say that we have a righteous prosecution in our country,” Shin said in a TBS interview. “Lee violated the only clause punishable with imprisonment in the Broadcasting Act.”

Shin also said the practices of the Park administration were no different from the censorship of the authoritarian Chun Doo Hwan regime in the 1980s.