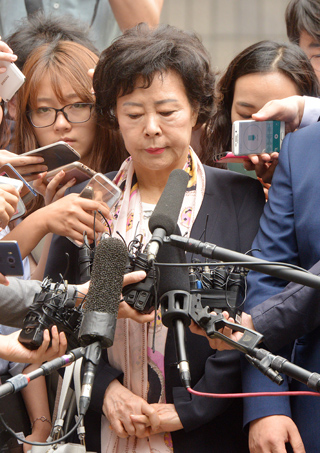 Shin Young-ja, executive director of the Lotte Scholarship Foundation and eldest daughter of Lotte Group founder Shin Kyuk-ho, is surrounded by reporters in front of the Seoul Central District Prosecutors’ Office in Seocho District, southern Seoul, on Friday as she was summoned by prosecutors. [JEON MIN-GYU]

From 2012 to last year, Shin is suspected to have received bribes from Jung via BNF Trading, a wholesale distributor that supplies Lotte Duty Free and Lotte Department Store with foreign fashion and cosmetics brands. Her son owns the distributor. He is forbidden from leaving the country, and the CEO of BNF Trading was arrested on June 8.

Prosecutors also suspect that Shin received some 1 billion won in bribes from a sushi franchise company in return for allowing it to maintain a branch within Lotte Department Store.

Prosecutors are considering filing an arrest warrant for Shin.

The investigation into Shin started with the arrest of a broker named Han Yeong-chul, who introduced Shin to former Nature Republic CEO Jung.

Han reportedly admitted to bribery involving Jung and Shin when he was arrested in May for allegedly receiving some 50 million won from Jung in return for lobbying to win military supply deals.

On June 2, over 100 prosecution investigators descended upon Lotte’s duty-free shops and Shin Young-ja’s home. On Tuesday, they raided the office and home of a Lotte Scholarship Foundation executive, one of Shin Young-ja’s close aides, to search for evidence.

Prosecutors suspect that investigations into Shin may reveal more evidence of possible slush funds within the family that controls Lotte Group given that Shin was an executive in the group for more than 30 years.

Shin is the eldest child of Lotte Group founder Shin Kyuk-ho and his only child with first wife Roh Soon-hwa. Her younger half-brothers Shin Dong-bin, current chairman of Lotte Group, and Shin Dong-joo were the offspring of her father and his second wife Hatsuko Shigemitsu.

Under her leadership as deputy executive of Lotte Department Store and CEO of Lotte Shopping, Lotte Group became one of the leading retail conglomerates in the nation.

She is also reported to have played a significant role in helping her half-brother Shin Dong-bin wrest away the chairmanship of Lotte Group last year.