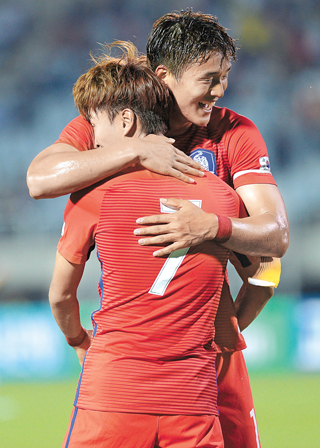 Lee Chan-dong, right, looks forward to playing on another international stage this summer at the Rio Olympics. [NEWSIS]

Lee Chan-dong of Gwangju FC has been selected as a midfielder on the national football team for the summer Olympics. Chosen by manager Shin Tae-yong, Lee is again a hometown hero as he gears up to play on yet another international stage.

In March 2015 when the preliminary roster for 2016 Asian Football Confederation Championships was announced, Coach Shin smiled as he drove through Eumseong County in North Chungcheong. Well known as the birth place of UN Secretary-General Ban Ki-moon, this little town had another event to celebrate last year when Lee was named to the national squad for the Asian championships. Shin’s smile was because of the banners that he spotted, congratulating Lee on his promotion to the national team. “Lee, I saw the banners lauding you for being in the national team,” Shin told Lee later during a practice.

The Korea Football Association and Shin announced the final 18-man roster for the Summer Games in Rio de Janeiro on Monday. Lee, who’s been consistently called up by Shin to play on the U-23 team, is delighted to be going to Brazil as well. When asked if there would be more banners in his home town, Lee said shyly, “My parents’ friends put up those banners [last year]. I was trembling as I waited for the announcement, like I was waiting for the results of the college entrance exam. I would like to become the pride of not just Eumseong but of all Korea. All there is left for me to do now is put in my utmost effort.”

Lee is a defensive midfielder representing the Gwangju FC of the K-League Classic. As a third-year professional footballer, Lee often reminds old football fans of now-retired Kim Nam-il. Kim gained the nickname “Vacuum Cleaner” with his clean tackling and aggressive defensive displays he first put on at the 2002 World Cup. Like Kim, Lee is aggressive on the pitch and does not shy away from charging his opponents. Lee’s tenacity on the ground, even against teams such as Nigeria and Denmark, who are notorious for their physical style of play, impressed Shin and prompted the skipper to choose Lee as his favorite midfielder. “Every time I get called up to the national team, I learn again the importance of speed and stamina,” said Lee. “I watched Jang Hyun-soo play during the East Asian Championship and learned a lot in terms of passing and technique. I am confident now that I am second to none when it comes to physical play.”

For Lee, football is something he is willing to risk everything for. He does not want to lose to anyone and he will not lose to anyone, he says. “A football pitch is a battle ground for me,” he said. “I have to put in everything I have; it may sound bizarre, but I love that about this game.”

“The Rio Olympics is also a battlefield where I have to come out with a victory,” Lee continued.

And he aims to go all the way this summer to the final match of the tournament. Compared to the past teams that Korea sent to the summer games, this year’s football team is deemed weak. But Shin begs to differ, saying that if the team is well organized and administered, it can repeat the feat Korea accomplished at the last Olympics when the team, headed by Hong Myung-bo, went on a run to win the bronze medal. “This is a big stage for me, wearing the Korean flag on my uniform,” Lee commented. “Our goal is a medal, of course, and I am not talking about the third-place playoff. I want to go all the way. We will survive this thing until the end and return home with our heads high.”