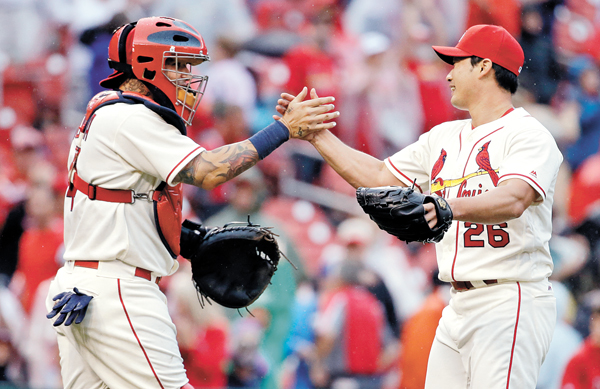 Oh Seung-hwan, an MLB rookie relief pitcher for the St. Louis Cardinals, picked up his first major league save yesterday against the Milwaukee Brewers, pitching a 1-2-3 ninth inning before a home crowd at Busch Stadium. The Cardinals beat the Brewers 3-0. Two of the three outs in the inning were strikeouts. Oh entered the game in the ninth after seven innings of work by starter Adam Wainwright and an inning from the Cardinals’ setup man, Jonathan Broxton,

Against the first Brewer he faced, Jonathan Lucroy, the righthander tossed three four-seam fastballs that averaged 91 miles per hour and then a slider that Lucroy swung at and missed for the first out. Chris Carter made contact with an 83-mph slider but grounded out to second baseman Kolten Wong. Kirk Nieuwenhuis whiffed an 82-mph changeup with a full count.

“Happy is one word I would describe the feeling as,” Oh told MLB.com. “I understand the importance, and that it’s one of the major accomplishments I’ve achieved in my baseball career. I’m very happy I could contribute to the team.”

Sunday’s save makes Oh the first Korean pitcher to record saves in three different leagues. He was a dominant closer in the Korea Baseball Organization and Nippon Professional Baseball Organization before crossing the Pacific. Jenifer Langosch, an MLB.com reporter covering the Cardinals wrote, “For the first time on American soil, ‘The Final Boss’ got an opportunity to pitch to his nickname.”

Oh has a two-year contract with the Cardinals with options that could potentially be worth $11 million. He joined the Cardinals to bolster the team’s bullpen and has been used primarily as a setup pitcher, charged with keeping control of the opposing team before the closer, usually a flame-thrower who rarely pitches more than one inning. Trevor Rosenthal has been the Cardinals’ closer. He’s been a closer most of the season, but the Cardinals’ All-Star has struggled mightily in his last few outings, and Oh was the obvious choice to fill his shoes. MLB.com’s Langosch wrote, “Now, until Oh relinquishes it or Rosenthal earns it back, the ninth belongs to him.”

Oh recorded 277 saves in the KBO with the Samsung Lions, and is the league’s all-time leader in saves. During two years with the Hanshin Tigers in Japan beginning in March 2014, he added 80 saves to his collection, which now totals 358.

“He’s continuing to impress us,” Cardinals manager Mike Matheny said after the win on Sunday. “And I think the rest of the league is obviously seeing that this guy is for real.”

“My goal was actually to be on the mound in Major League Baseball,” Oh said. “I didn’t see this coming. My mentality right now is not thinking of myself as a closer. I’m trying to fill in the empty space where Rosey used to be. I’m just trying to get guys out.”

His teammates are also excited about Oh’s first big league save, but his numbers as a middle reliever also show that he is competitive in the U.S. majors. “He’s got great stuff. His stuff plays anywhere,” said starter Adam Wainwright. “He’s got that deceptive delivery and good stuff to go with it. He is obviously not scared of any situation. They call him the Stone Buddha for a reason, right? He has that look on his face that he has been there and done that and been in bigger moments.”

As of Sunday, the Jeongeup, Korea, native is ranked second in the National League with 55 strikeouts, a 1.54 earned run average, two wins and one save with .85 walks plus hits per inning pitched (WHIP). The only remaining question is whether his arsenal of pitches, thrown from several different angles, will continue to puzzle opposing hitters after they have faced him a few more times.

Elsewhere in the majors, Texas Rangers’ outfielder Choo Shin-soo continued to flex his muscles, this time against the Minnesota Twins on Sunday at Target Field in Minneapolis. Batting leadoff for the Rangers, Choo hit a solo home run in the top of the seventh, his fourth in the past 10 games and fifth of the season. His effort was for naught, however; the Rangers fell to the Twins by a lopsided 17-5.