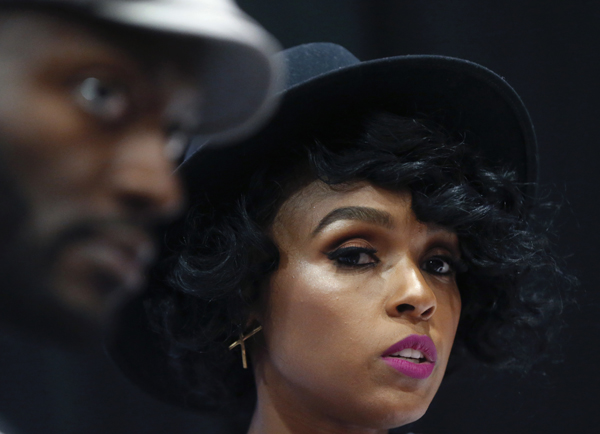 Singer Janelle Monae discusses her role in “Hidden Figures,” during an interview with The Associated Press at the Essence Festival Expo in New Orleans held on July 1 local time. The film aims to tell the story of three African-American women who worked at NASA during the 1960s space race. [AP/NEWSIS]


NEW ORLEANS - Janelle Monae says she’s honored to be part of an upcoming film that tells the little known story of three black women who were a crucial part of NASA’s history, including one who helped John Glenn become the first American to orbit earth.

The Grammy-nominated singer is making her big screen debut in “Hidden Figures,” which tells the story of Katherine Johnson, Dorothy Vaughan and Mary Jackson - three women who worked at NASA in the 1960s.

“It is so important, that we as women, African-American women, tell our stories,” Monae said. “These three women opened doors for us and literally helped change the world.”

“Hidden Figures” stars Taraji P. Henson as Johnson, Oscar-winner Octavia Spencer as Vaughan and Monae as Jackson. The women were mathematicians and Johnson helped calculate the trajectory for Glenn’s orbit around earth, among other accomplishments. The cast also includes Aldis Hodge, Kevin Costner and Kirsten Dunst. Segments of the film were shown to fans Friday at the Essence Festival, the annual four-day music festival geared toward black women.

Monae said she cried when she received the script.

“I cried because I had never heard of Katherine Johnson or Dorothy Vaughan or Mary Jackson. But I know these women and their struggles,” she said. “I am Mary. I am so honored to play her. This film is so important because it shows black people and black women in a different light.”

Hodge, who plays Jackson’s husband, Levi, said he relished the role. “He was an activist and had to deal with the dangers that came with that in the segregated south. And y’all see how feisty (Monae’s character) was? He had to come home and deal with her,” he said laughing.

The film, which is set for release Jan. 13, 2017, is based on Margo Lee Shetterly’s book, “Hidden Figures: The American Dream and the Untold Story of the Black Women Mathematicians Who Helped Win the Space Race.”

Hodge said he was surprised when he heard about the women’s stories.

“I was so surprised to find out that black women worked at NASA. Who knew? I didn’t and that’s devastating. Something this great should be common knowledge,” said Hodge, who grew up studying engineering and uses his talents to make watches.

Monae asked the audience who had seen the movie “Apollo 13.” Several hands went up. “Did you know these women helped on that project too and were not even mentioned in that movie?” she said.

“These women were pioneers. They won and even more important, America won. And that’s huge,” she said. “Without them we might still be trying to figure out how to get a shuttle into space.”

Astronaut Victor Glover, a former Navy pilot who was among eight selected to join the space program in 2013, thanked them for their work on the project.

“Thanks for telling this story,” he said. “I work with an amazing group of women, black women, at NASA and I want to thank you for them and my four daughters sitting over there. It’s important that they see what they can be and we need to tell them.”

Monae echoed him, saying, “It’s important for children, especially inner-city children to see their future selves in a different light. We’re not all the same. There’s so much depth to us and films like this help to change the stereotypes and make studying STEM cool. It’s absolutely the coolest thing to be able to send someone into space.”

Shetterley’s father worked with the women whose lives are the film’s subject and often told her stories about them. The only one still living is Johnson, who turns 97 in August. She was given the presidential medal of freedom from President Barack Obama last year. AP